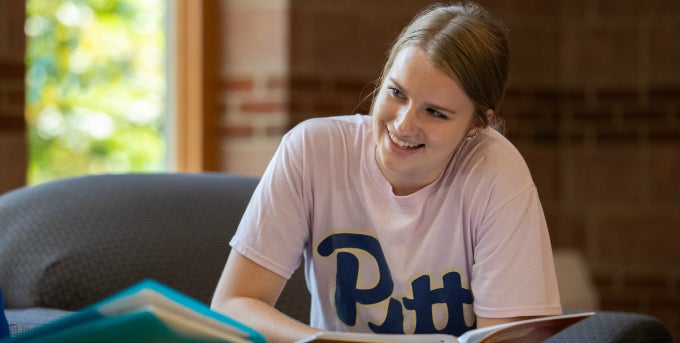 English Literature  courses are a cornerstone of Pitt-Greensburg's liberal arts curriculum expected of all majors, and our courses serve to fulfill General Degree requirements in Literary Traditions (LT) and Humanities (HM). Our elective courses are often populated by students from many different majors and backgrounds. Core classes usually attract a greater concentration of English Literature majors and minors, who get to know each other and their professors very well as a friendly and supportive community.

You need not take the six core classes in a particular order, but you will find that each course offers many connections with the others. (For example, the Renaissance and 18th-century courses strongly relate to what we discuss in 19th-century British Literature, so that Englit 1175 could be good preparation for the courses covering earlier material, or could be equally useful to take after those courses.) You may not wish to take more than two core courses in the same semester, since they usually require rather intensive reading and writing.

As of the 2011-2012 school year, ENGCMP 1158: Grammar and Copyediting is now the designated W course for English Literature and English Writing majors. For English majors beginning their freshman year in 2011-2012 or later, this course is mandatory. For all other students, this course is strongly recommended and can be used to replace the general requirement for ENGCMP 0030. ENGCMP 1150 will be offered beginning in Spring 2012.

Please see our posted course descriptions, and feel free to ask us for more information, or about which electives we plan to

offer in the near future. Electives like Reading Poetry, The Short Story, Satire, Jane Austen: Books and Film, Science Fiction, Fantasy and Romance,  Literature of the American West, and Development of the Novel (among many others) are not offered on a set schedule, but we do try to offer an interesting variety each term.

Our majors will find the Distribution of Credits sheet useful to refer to in plotting out which courses to take each term. Students should always bring an up-to-date DOC sheet with them when visiting academic advisors to plan their coursework. We strongly encourage English Literature majors to seek out one of our faculty to be their advisor as soon as possible, since we can provide detailed perspective on our coursework as well as big questions about career possibilities or graduate work. Ask one of us faculty, and we'll be glad to advise you.