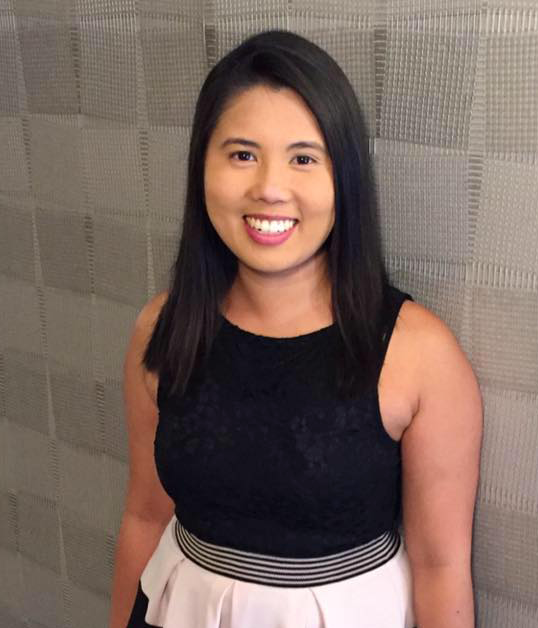 The Pitt-Greensburg Alumni Association (PGAA) will present its Volunteer of Excellence award to Huong Vo ’14 at the Alumni Awards Virtual Celebration Ceremony to be held at noon on Saturday, October 3. Visit https://www.greensburg.pitt.edu/alumni/awards to view the ceremony.

The PGAA Volunteer of Excellence Award was established in 2009 to recognize alumni who volunteer their time to the PGAA and the University of Pittsburgh at Greensburg. The award honors alumni who have dedicated a significant amount of personal time to attending alumni meetings and events, working on special projects, and contributing to the overall success of both the alumni association and the University it represents.

“I am so grateful to be the recipient of the Volunteer Excellence Award,” said Vo, a Bloomfield, PA, native who now lives in Monroeville, PA. “I chose to be a member of the PGAA to give back to the university that has provided me with so much during my time as a student. I truly enjoy volunteering on campus, planning events for alumni, networking, spending time with old friends, and meeting new people. I am thankful to have the opportunities to volunteer for the PGAA.”

In addition to working full-time and attending graduate school, Vo serves as a member of the PGAA board where she chairs the Events Committee. Bringing a bright and positive energy to the PGAA activities that she plans, she is frequently found, cell phone in hand, sharing video of an event for a “Facebook Live” when it is possible to hold events in person. She also is bringing new ideas to the virtual realm, contributing a range of activities that are bringing Pitt-Greensburg alumni together from across the nation and the globe. She also is an advocate for events being held throughout the region to engage with alumni across the area.

“Outside of the events committee, she has organized alumni teams for the Relay for Life event held on campus, volunteered with the Men’s Basketball Alumni Club 2019 Reunion, and has also volunteered for the Health Care Panel on campus in 2019,” said Robert P. Najim ’93, MBA, CPA, president of the Pitt-Greensburg Alumni Association Board of Directors. “In the past, she has also volunteered at Admissions events too. She truly volunteers as much as she can and does her best to get others involved as well. She is always smiling and brings such positive energy to the PGAA and everything else she volunteers with. Her volunteer efforts have made our events stronger, more engaging, and have increased participation in the organization and the campus in general.”

Vo transferred to Pitt-Greensburg in 2011 and graduated from in 2014 with a bachelor’s degree in Natural Science. Her contributions to the campus and community were recognized with the 2013 John Ridilla Leadership Award Scholarship and the 2014 PGAA Award for Community Service.

Active with the Student Government Association (SGA), Vo served as secretary, Campus Spirit and Community Involvement chair, and Senate President. The SGA plays an important role in campus life as a student group that seeks to make improvements to the campus, plans and organizes large and small events to engage the campus, and oversees all of the clubs and organizations on campus.

Vo also served as secretary of the Academic Village Senate where she collaborated in creating programs and events and served as an International Student Mentor.

After graduation, Vo worked at MedExpress Urgent Care as a medical assistant, earned an EMT license, and enrolled in nursing school. She graduated from the Shadyside School of Nursing in 2019 and now works as a nurse at UPMC East in the Stepdown Unit. Vo is currently working on her master’s degree at Carlow University with plans to become a family or pediatric nurse practitioner.

“Being a nurse has provided me with rewarding experiences, allowed me to meet so many people, and truly changed my life,” said Vo, who received UPMC East’s first-ever Daisy Award, an award that recognizes nurses who provide extraordinary compassionate care.

Founded in 1963, the University of Pittsburgh at Greensburg is a publicly assisted, four-year, liberal arts college in southwestern Pennsylvania. Pitt-Greensburg offers 30 baccalaureate degree programs, including new majors in data analytics, nursing, healthcare management, Public Policy, and Education, as well as 26 minors and four certificate programs. With nearly 1,500 students, more than 10,000 alumni, and faculty and staff numbering 260, Pitt-Greensburg provides a vibrant, diverse community that is a dynamic model of a 21st-century liberal arts education. As part of the University of Pittsburgh system, Pitt-Greensburg offers the resources of a world-renowned university combined with the individualized and immersive experiences of a small liberal arts college. Creativity and an entrepreneurial spirit permeate the campus and extend into its many collaborative projects with the Westmoreland County community. Nestled in Pennsylvania’s beautiful Laurel Highlands, the campus is less than an hour’s drive from Pittsburgh.