The Joan Chambers Concert Series at the University of Pittsburgh at Greensburg (150 Finoli Drive, Greensburg, PA 15601) returns after a two-year hiatus and welcomes Pittsburgh’s premier chamber choir Voces Solis to perform Saturday, March 19, at 7:30 p.m. in the Mary Lou Campana Chapel and Lecture Center. This event, which will be performed both in-person and via live stream, is free and open to the public.

“We’re excited to bring Voces Solis to our campus as well as to welcome our audience back to campus,” said Chris Bartley, director of music at Pitt-Greensburg. “We are looking forward to sharing this vocal experience in the Mary Lou Campana Chapel and Lecture Center and renewing the diversity of our concert series. Voces Solis features some of the best voices in the Pittsburgh region and Ryan Keeling is a dynamic leader and terrific conductor.”

Voces Solis is known for performing a diverse repertoire of challenging and innovative choral works. The group is composed of professional musicians, music educators, and experienced choristers who are committed to providing an educational experience through their musical selections and their performances. 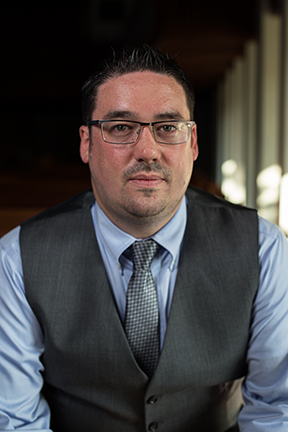 “The most important thing that makes Voces Solis special is the people who make up the ensemble and organization,” said Ryan Keeling, DMA, the artistic director of the group. “These are teachers, performers, actors, office workers, etc. People who come from every walk of life who get together to make choral music at the highest level.”

Keeling continued, “The program is titled ‘Make Peace’ and it is a musical reflection on inner and outer peace, peace for ourselves and peace for others, and the places in which we should be making peace. The title comes from the work on the program by composer David Lang that says ‘if you can make peace, make peace.’ We had planned this concert for last September but after its postponement, the subject matter has become even more important, I think.”

In addition to Lang’s work, the program will include Motherless Child (Adolphus Hailstork), Nearly Insane (Ysaye Barnwell), BWV 230, Lobet den Herrn (JS Bach), and And the Swallow (Caroline Shaw), and Keeling hopes the performance will provide its listeners with inspiration, joy, possibly a bit of a challenge, and ultimately peace.

Under Keeling’s leadership, Voces Solis has been selected by blind jury to perform at regional and state American Choral Directors Association (ACDA) conferences. A teacher, singer, and conductor in the Pittsburgh area, Keeling also is the conductor of the professional women’s choir Virago and the assistant conductor of the Mendelssohn Choir of Pittsburgh, which is the Pittsburgh Symphony Orchestra’s “chorus of choice.”

Keeling also is the director of choral activities at Westminster College where he conducts the Concert Choir, Chamber Singers, and Men’s and Women’s Choruses. He also teaches classes in diction and choral conducting. Previously, he was director of choral activities at West Liberty University. He also served as the assistant director of Music and Worship Life and director of Choirs at Christ United Methodist Church in Bethel Park where he conducted six choirs; as director of Choral Music at Mt. Lebanon United Methodist Church; as a professional core tenor in The Mendelssohn Choir of Pittsburgh; and as the director of the Pappert Men’s Chorale at Duquesne University. The founding conductor of the OvreArts Chamber Singers, Keeling served as music director and principal conductor of the group, conducting the OvreArts Sinfonia.

A tenor soloist, Keeling has performed with the Mendelssohn Choir of Pittsburgh, the Pittsburgh Symphony Orchestra, the Pittsburgh Concert Chorale, and at the National Pastoral Musicians National Conference.  In 2012 he made his New York City debut performing Bach’s cantata BWV 4 Christ Lag in Todesbanden and Beethoven’s Choral Fantasy in the Cathedral of St. John the Divine.

During the pandemic, the Pitt-Greensburg Chorale and Chamber Singers remained active musically on campus, using a variety of measures to ensure the safety of the group and their audiences, but the Joan Chambers Concert Series was dormant. “We’re again to have great music in a great environment,” said Bartley. “Pitt-Greensburg and the Mary Lou Campana Chapel and Lecture Center are ready to renew their reputations as a destination for great music in Westmoreland County. We’re excited to welcome back our audiences, both in-person and online.”

ABOUT THE JOAN CHAMBERS CONCERT SERIES:

The Joan Chambers Concert Series is made possible through the generous support of President Emeritus George F. Chambers. It brings local, national, and international artists to the Pitt-Greensburg campus for performances of the highest professional caliber. The series is named in honor of Joan Chambers, late wife of President Chambers, who was an ardent supporter and representative of Pitt‐Greensburg in the community for many years. While her interests were widespread, she especially enjoyed participating in book‐discussion groups, attending cultural events, hosting themed luncheons at her home, and spending winters in southwest Florida. The Children’s Literature Collection in Millstein Library, another of her passions, was developed and named in her honor.

Founded in 1963, the University of Pittsburgh at Greensburg is a publicly assisted, four-year, liberal arts college in southwestern Pennsylvania. Pitt-Greensburg offers 31 baccalaureate degree programs, including new majors in data analytics, nursing, and healthcare management, as well as 27 minors and four certificate programs. With nearly 1,400 students, more than 10,000 alumni, and faculty and staff numbering more than 260, Pitt-Greensburg provides a vibrant, diverse community that is a dynamic model of a 21st-century liberal arts education. As part of the University of Pittsburgh system, Pitt-Greensburg offers the resources of a world-renowned university combined with the individualized and immersive experiences of a small liberal arts college. Creativity and an entrepreneurial spirit permeate the campus and extend into its many collaborative projects with the Westmoreland County community. Nestled in Pennsylvania’s beautiful Laurel Highlands, the campus is a five-minute drive from uptown Greensburg and less than an hour’s drive from Pittsburgh.