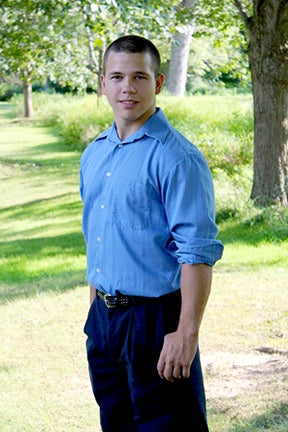 The Pitt-Greensburg Alumni Association (PGAA) will present its Young Alumni Leadership Award to Justin Cannalley ’15 at the Alumni Award Celebration Dinner on Saturday, Oct. 2, as part of Blue & Gold Celebration 2021.

The PGAA Young Alumni Leadership Award, initiated in 2015, recognizes established and future leaders among Pitt-Greensburg’s young alumni who are age 35 and younger. The winners of this award have distinguished themselves as leaders among their peers and in their profession, community, and/or at the University.

“I am humbled at receiving such a great honor,” said Cannalley. “Thank you to all of those who helped direct me into a service-first lifestyle. One of the key figures that I would like to thank is Brian Root. He took me under his wing freshman year and opened my eyes to what it meant to give back. Having involvement with clubs such as Habitat for Humanity and Outdoor Adventure and Community Service (OACS), as well as working alongside the Residence Life staff, provided me with some of the most aspiring role models that anyone could ask for. Without those connections from Pitt-Greensburg, I am unsure that I would have grown into the man that I am today.”

Cannalley, who is from Philadelphia, PA, graduated from Pitt-Greensburg with a degree in anthropology. He joined AmeriCorps and was an AmeriCorps team member with Habitat for Humanity Summit & Wasatch Counties in Utah (2015-2016), serving as a build coordinator for a home that would become a home for a single mother and her two children.

In 2016, he moved to Tennessee and worked for the Community Action Committee AmeriCorps, which is the longest-running environmental service in the state of Tennessee. A forest technician with the vegetation management team at Great Smokey Mountains National Park, he assisted with treating hemlock and ash trees against invasive pests as well as removing exotic plants from the park. He was also a wild-land firefighter and participated in prescribed burns in the park.

In 2017, he joined the Army Corps of Engineers and volunteered to go to Puerto Rico from October to February 2018 to help with disaster relief from Hurricane Maria. In Puerto Rico, he traveled around the island every day, making sure existing power generators were working properly, and if they weren't, he would help troubleshoot the issue or repair it himself.

In 2019, he joined the Army Reserves as an 88M Motor Transport Operator, which is primarily responsible for supervising or operating wheel vehicles to transport personnel and cargo. He participated in 10 weeks of Basic Combat

Training and six weeks of Advanced Individual Training. Part of this time was spent in the classroom, part in simulation, but more than 200 training hours were spent in actual vehicle and field training environments. Since completing Basic Training, he has returned to Philadelphia where he works as a service manager with GREENIX Pest Control and leads a team of 28 technicians in performing pest-control operations in eastern Pennsylvania.

During his time as a student, Cannalley served as a community assistant, was president of the Bowling Club, volunteered with Habitat for Humanity, was a presidential ambassador, and participated in many other clubs and organizations. As an alumnus, he volunteered on the 2018 Habitat for Humanity Spring Break Trip. He also was a member of the Pitt-Greensburg Alumni Association board of directors. His participation with the PGAA began as a volunteer with the Events Committee before joining the board. Despite not always living in the area, Cannalley stays connected with the campus and participates virtually when possible. He also has helped with many PGAA events.

Since returning to Philadelphia, Cannalley has been working on home renovations both indoors and out in his yard. He is also in the process of completing renovations for a local apartment building. He plans to volunteer with his local Habitat for Humanity affiliate once the COVID-19 restrictions are relaxed and the orientation program resumes.

Founded in 1963, the University of Pittsburgh at Greensburg is a publicly assisted, four-year, liberal arts college in southwestern Pennsylvania. Pitt-Greensburg offers 31 baccalaureate degree programs, including new majors in data analytics, nursing, healthcare management, Public Policy, and Education, as well as 27 minors and four certificate programs. With nearly 1,500 students, more than 10,000 alumni, and faculty and staff numbering 260, Pitt-Greensburg provides a vibrant, diverse community that is a dynamic model of a 21st-century liberal arts education. As part of the University of Pittsburgh system, Pitt-Greensburg offers the resources of a world-renowned university combined with the individualized and immersive experiences of a small liberal arts college. Creativity and an entrepreneurial spirit permeate the campus and extend into its many collaborative projects with the Westmoreland County community. Nestled in Pennsylvania’s beautiful Laurel Highlands, the campus is located less than an hour’s drive from Pittsburgh.