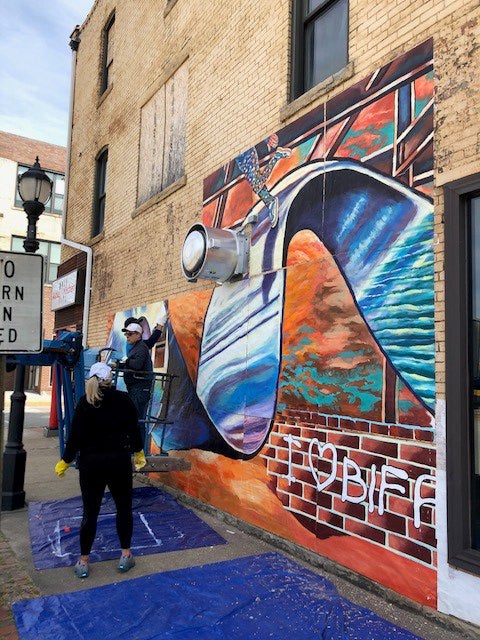 After nearly two years of planning, designing, and painting, the mural designated for downtown New Kensington (453 9th Street, New Kensington, PA 15068) will be dedicated at the close of the community clean-up set for Sunday, April 11. The mural project was orchestrated by the Community Arts and Reintegration Project (CARP), part of the Center for Applied Research (CFAR) at the University of Pittsburgh at Greensburg. Westmoreland Community Action, a major funder for the project, and Olde Towne Overhaul also partnered with Pitt-Greensburg on the venture.

The dedication ceremony will begin at 3:30 p.m. and will include remarks from New Kensington Mayor Tom Guzzo, artist Bernie Wilke, CARP director Tim Holler, PhD, and two members of the community who are featured on the mural. Following the dedication, a celebration will be held at Voodoo Brewery (956 5th Avenue, New Kensington, PA  15068). Food and refreshments will be provided (individuals may purchase alcohol on their own).

“We are looking forward to celebrating the work of the community and the completion of this large-scale community mural,” said Holler, an associate professor of criminal justice at Pitt-Greensburg. “Its location at one of the gateways to New Kensington showcases the significant history of this community.”

The mural is symbolic in a number of ways. A selfie-spot is incorporated that would allow a person to look like they were pouring molten aluminum into their molds. Also, in an effort to include the rich diversity that is representative of New Kensington, a diverse group of individuals inhabits the design in a variety of ways. The location of the New Kensington mural is the building formerly housing Walt’s Deli.

Funding for the mural, in part, was provided through a grant from the University of Pittsburgh’s Year of Creativity. Westmoreland Community Action also supported the project. Additional information about the mural project may be found here: https://bit.ly/CARP-NewKen-Mural.

Wilke, who has more than 80 community murals to his credit, provided artistic expertise and direction to the project. An adjunct professor at Westmoreland County Community College, Wilke describes himself as a visual artist who is committed to working in community settings.

A key component of CARP is its restorative justice element that brings together community members, organizations, and youth currently on probation with the Westmoreland County Juvenile Probation Department to develop and construct the murals that will be installed on selected buildings in targeted cities throughout the county.

"Using restorative justice processes as a developmental tool has allowed us to incorporate a wide range of ideas from the New Kensington community, while also building a sense of communal pride and connection," explained Holler. "COVD-19 made it difficult to incorporate more of the community, especially juvenile probationers, into the painting process, but that didn't stop us from hosting socially distanced events for community painting."

This is the second community mural to be initiated by CARP. Its first mural was designed with the assistance of community members from Mt. Pleasant and is now installed on the side of the American Architectural Salvage building at the entrance to the Coal & Coke Trail.