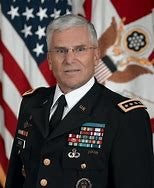 General George W. Casey, Jr. served 41-years as an American soldier following his commission as a second lieutenant of Infantry from Georgetown University School of Foreign Service in 1970. He is an accomplished leader and an authority on strategic leadership.

As the 36th Chief of Staff of the US Army from April 2007 to 2011, General Casey led what is arguably the world’s largest and most complex organization—1.1 million people strong, with a $200+ billion annual budget—during one of the most extraordinary periods in military and global political history. He is widely credited with restoring balance to the war-weary US Army, leading the transformation to keep the Army relevant in the 21st Century, and ensuring the force deployed in the war on terror was the best this country ever fielded. On the home front, General Casey took on the tough issues of suicide, combat stress, and reducing the stigma attached to mental health care. He was also a stalwart advocate for military families, wounded Soldiers, and survivors of the fallen.

Prior to this, from July 2004 to February 2007, he commanded the Multi-National Force–Iraq, a coalition of more than 30 countries. General Casey guided the Iraq mission through its toughest days, driving significant change in the US Armed Forces and building the Iraqi security institutions while battling a difficult insurgency and sectarian violence.

He currently serves as a Distinguished Senior Lecturer of Leadership at the SC Johnson College of Business, Cornell University, and lectures on leadership internationally at business schools and to the leadership of numerous organizations, most notably, Coca-Cola, Caterpillar, Coca-Cola Bottling, Africa, the National Australian Bank, the states of Victoria and New South Wales, Australia, Amazon, TDAmeritrade, Pentagon Federal Credit Union, and General Electric.

He also teaches international relations at the Korbel School, University of Denver. He has authored and published the book, Strategic Reflections, Operation Iraqi Freedom, July 2004-2007, about his experiences in Iraq, and several articles on leadership, including, “Leading in a ‘VUCA’ World”, Fortune Magazine, April, 2014.

He is a member of the Board of Directors of Georgetown University, Colt Holding Company, LLC, and the Board of Trustees of the Home Builders’ Institute, a national leader for career training in the building industry. He is also a member of the Board of Advisors for Odgers Berndtson, a leading executive search and organizational leadership firm; Streetshares, a crowd-sourcing firm for Small Businesses and veterans, RallyPoint, a network for veterans and military professionals, and Sarcos, a global leader in dexterous robotic systems.

General Casey holds a Masters Degree in International Relations from Denver University, where he is currently the Rice Family Professor of Practice, and he served as a Senior Fellow at the Atlantic Council of the United States, a foreign policy think-tank. He has broad international experience. Born in Japan, he served in operational assignments in Europe, the Balkans and the Middle East.

Known for his vision, candor, integrity and humor. General Casey’s story is one of personal courage and commitment to excellence. His great love of country and his life of service form the basis of his viewpoints on leading in today’s volatile, uncertain, complex and ambiguous world.

In addition to receiving training, leadership experience, and military-related courses, ROTC cadets receive financial support for their education that includes monthly living allowances. ROTC cadets interested in pursuing a career in the military are encouraged to apply for scholarships, including full-tuition scholarship opportunities and nursing scholarships. Information on Pitt’s ROTC program is available at rotc.pitt.edu.