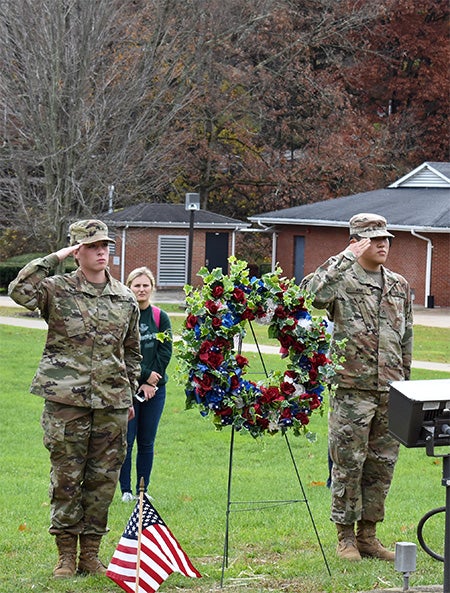 The University of Pittsburgh at Greensburg will offer a week-long series of activities designed to highlight the contributions and service of military veterans and active-duty personnel. These events are supported in part by a 2019 Pitt Seed Grant. Some of the events, where noted, are in partnership with the Pitt-Greensburg Academic Village, Millstein Library, the Pitt-Greensburg Chapter of Phi Eta Sigma Freshman Honor Society, The Veterans Breakfast Club, and Soldiers & Sailors Museum. ​Boy Scout Troop #457 out of New Stanton, PA, will be placing small American flags along the walkways on campus. Each flag represents a Pennsylvania veteran who lost his or her life in service to our country. The events begin Monday, November 11 and continue through Friday, November 15.

Veterans Week 2019 is a series of events aimed at building bridges, promoting understanding, and encouraging dialogue. While some of these events are open only to the campus community, there are four events that are open to the public or to veterans and their families. There is no cost to attend the events. A chronological synopsis of the events is listed below.

Available to the public during normal business hours

11 a.m. at the flag poles located outside of Chambers Hall
Open to the public

11:30 a.m. to 1 p.m. in the Hempfield Room (Chambers Hall)
It is open to all area veterans and their families, as well as to all Pitt-Greensburg students who are Veterans or active military and their families.

This event is open ONLY to Pitt-Greensburg Military and Veteran students.

7 p.m. in Village Hall 118
This event is open to the public at no cost. Light refreshments will be provided.

10:30 a.m. to 2 p.m. table located in Chambers Hall (Bobcat Station)
This event is for the Pitt-Greensburg campus community

7 p.m. in the Mary Lou Campana Chapel and Lecture Center
This event is open to the public at no cost and is presented in partnership with The Veterans Breakfast Club.

All day throughout campus
Noon: photo at the Chambers Hall flag poles