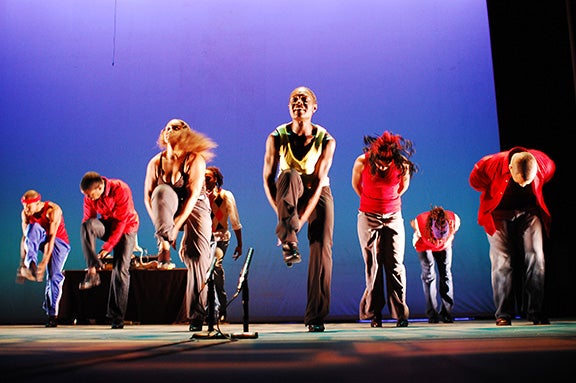 The University of Pittsburgh at Greensburg presents Step Afrika! on January 12, at 8 p.m. in Ferguson Theater. This performance is free and open to the public and is sponsored by the Pitt-Greensburg Student Activities Board, Academic Village, and Student Government Association with funding, in part, through the Pitt Year of Diversity grant program.

Step Afrika! is the first professional company in the world dedicated to the tradition of stepping. The Company blends percussive dance styles practiced by historically African American fraternities and sororities, African traditional dance, and influences from a variety of other dance and art forms. Performances are much more than dance shows; they integrate songs, storytelling, humor, and audience participation. The blend of technique, agility, and pure energy makes each performance unique and leaves the audience with their hearts pounding. Step Afrika! promotes stepping as an educational tool for young people, focusing on teamwork, academic achievement and cross-cultural understanding.

Founded in 1994, Step Afrika! is ranked as one of the top ten African American dance companies in the United States. It began as an exchange program with the Soweto Dance Theatre of Johannesburg, South Africa, and expanded to become a national and international touring company that presents performances, residences and workshops worldwide. Annually, it reaches tens of thousands of Americans through a 50-city tour of colleges and theatres and performs globally as a cultural ambassador.

The dance company has received numerous awards including the 2011 Pola Nirenska Award for Contemporary Achievement in Dance, the 2012 Mayors Arts Awards for Excellence in an Artistic Discipline, the 2008 Mayors Arts Award for Innovation in the Arts, and the 2010 Metro DC Dance Award for Outstanding Group Performance.

The group’s website (http://www.stepafrika.org/company/what-is-stepping/) describes stepping as an important part of America’s artistic and cultural heritage. It goes on to explain that the body is used as an instrument to create intricate rhythms and sounds through a combination of footsteps, claps, and the spoken word. The dances draw movements from African foot dances as well as the song and dance rituals practiced by historically African American fraternities and sororities, beginning in the early 1900s. The art form continues to evolve to include other styles such as Tap, Modern, and Hip Hop.

The University of Pittsburgh at Greensburg is committed to a program that broadens students understanding of the human experience and the fundamental skills necessary for academic success and learning throughout their lifetimes. This presentation of Step Afrika! is just one of many diversity-related activities available to the campus community throughout the academic year.