Pitt-Greensburg’s Dark Hamlet an adaptation of Shakespeare’s Hamlet; performance to be done via Zoom

One year ago, COVID-19 sidelined the Pitt-Greensburg Theatre Company’s spring 2020 production of The Government Inspector. The company successfully rebounded with their fall 2020 production of Henrik Ibsen’s An Enemy of the People that was adapted to a radio play performed via Zoom. Theatre Director Stephen A. Schrum, PhD, took the lessons learned from the fall production and applied them to the spring 2021 production of Dark Hamlet, an adaptation of Shakespeare’s Hamlet. 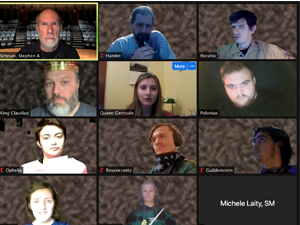 “We are looking to create a performance that will use Zoom to its advantage,” said Schrum, Pitt-Greensburg’s director of theatre and associate professor. “Dark Hamlet is a collage production of William Shakespeare’s Hamlet, using a severe cutting of the text and the technology of video conferencing to create a morphine dream for the audience--and for the character of Hamlet himself.”

The idea for the show came from several sources. Schrum explained that his initial inspiration came from a director named Charles Marowitz, who is also the author of a book entitled Recycling Shakespeare. Marowitz suggests that the texts of the Elizabethan playwright should not be considered sacred, but rather, the texts be used as the starting point for new works that take apart, dismantle, and restructure the bard’s plays. Schrum began working on such an adaptation, Dark Hamlet, which begins with the “To be or not to be” soliloquy and continues on as Hamlet’s morphine dream unfolds.

“The draft sat gathering dust in my filing cabinet until a more recent inspiration struck,” said Schrum. The new inspiration came about when Schrum’s play, Aliens! 3 Miles, Turn Left, was produced by the Alley Theatre in Dublin, OH, as part of their Virtual Theatre Project. The production was then chosen as a finalist by The Red Curtain International Good Theatre Festival, a festival of online plays headquartered in India. “While participating in a welcome event,” Schrum continued, “I watched a play written specifically for presentation on Zoom, and recalled Dark Hamlet, thinking it had been incubating for just this moment.”

Schrum warns that his adaptation is not for Shakespeare purists as much of the text will be missing, and only about one-sixth will remain--and that will not be in the usual order. He believes that what the audience does see and hear will be illuminating for those curious about Hamlet, the play and the character.

Dark Hamlet will be presented in two live performances on Zoom: Saturday, March 27, at 7:30 p.m. and Sunday, March 28, at 2 p.m. The performances will be archived and made available for viewing after the live run is complete. Admission is free. Details about the performance and how to access it are available on the Visual and Performing Arts News and Events web page.

Schrum brings together current students, alumni, and a former student for the 10 person cast.

Emily Buckel, from Republic, PA, graduated from Pitt-Greensburg with a BA in creative and professional writing and a minor in theatre. She returns to the Pitt-Greensburg Theatre Company in the role of Ophelia. Her previous roles include Desdemona in When Shakespeare’s Ladies Meet, the Script Girl in Shakespeare in Hollywood, Myrtle Mae Simmons in Harvey, Miranda in The Tempest, Vixen 2 in Dracula, for which she also served as Assistant Stage Manager, Ziggy the Village Idiot in Young Frankenstein, Moskvin in Chekhov in Yalta, Aslaksen in Enemy of the People, and was rehearsing the role of Marya Antonovna in The Government Inspector last spring before COVID-19 shut down the production. Emily is also a member of Delta Psi Omega (DPO), the National Theatre Honors Society, and PAS (the Performing Arts Society).

Senior Felicia Dusha will portray Queen Gertrude. She made her Pitt-Greensburg Theatre company debut in the fall 2020 production of Enemy of the People. Dusha, who is from Greensburg, PA, is an English Literature major with minors in philosophy and criminal justice. She is active on campus as the treasurer of Sigma Tau Delta and with the Criminal Justice Club.

Joseph Fitz, a senior visual and performing arts major (music concentration) is from Titusville, PA, by way of Jacksonville, IL. He will portray Rosencrantz/Player King in Dark Hamlet. At Pitt-Greensburg, Fitz has played the roles of cabdriver E.J. Lofgren in Harvey, Sebastian in The Tempest, Attendant 1 in Dracula, and Hans Kemp in Young Frankenstein. Last semester he worked backstage on Chekhov in Yalta. He was rehearsing the role of Dobchinsky in The Government Inspector before the COVID-19 shutdown. Fitz also has nine other performances to his credit with the Titusville Summer Theater, the Barrow Civic Center (Franklin, PA), and the Titusville High School. He also “chaired” in the Pennsylvania Music Educators Association in Junior District Choir and in District and Regional choirs.

Laertes will be portrayed by Clayton E. Gregg V, a first-year legal psychology major from Connellsville, PA. His past roles include Grimsby in The Little Mermaid, Joly in Les Miserables, and Ensemble in Phantom of the Opera, The Lion King Jr., and Hairspray Jr. Gregg made his Pitt-Greensburg theater debut last semester in Enemy of the People.

Senior visual and performing arts major (music concentration) Deanna Lesso is cast as Osric/Player Queen. Lesso, who is from Canonsburg, PA, also is minoring in psychology. At Pitt-Greensburg, she has played Miss Johnson in Harvey, Adrian in The Tempest, Ensemble in Young Frankenstein, Billing in Enemy of the People, and was rehearsing the role of Pentelaeyev in The Government Inspector last spring. She is a member of the Performing Arts Society, Delta Psi Omega, Sigma Tau Delta Honor Society, Active Minds, Christian Fellowship, and Phi Eta Sigma Honor Society. Lesso, who has had piano training for 15 years and voice training for eight years, is involved with the Pitt-Greensburg Chorale and the Piano Studio. She has had the lead in three community theatre productions and seven high school productions.

Cletus McConville ’16, from Ligonier, PA, will take on the role of Polonius. A visual and performing arts major (theatre concentration), McConville took on a variety of roles as a student: Arsenic and Old Lace (Mr. Witherspoon), Eleanor: An American Love Story (ensemble), Birth of Merlin (The Devil), A Very Potter Musical (Professor Quirrel), Chemical Imbalance (Dr. Jekyll and Mr. Hyde), Middletown (John Dodge), and Man of La Mancha (Cervantes/Don Quixote/Alonso Quijana). A Green Scholar working with Schrum, McConville served as editor for a documentary film, which can be viewed on Youtube. His senior capstone project was a film he wrote and directed. While at Pitt-Greensburg, McConville also served as president of Delta Psi Omega Honor Society, vice president of the Performing Arts Society, and vice president of the Visual Arts Society.

John Paul Ritchey ’18 will portray Hamlet. Ritchey is a local actor from Greensburg who has been active in Westmoreland County community theater productions since 2015. Last semester, he portrayed Dr. Stockmann in the campus production of Enemy of the People. Ritchey, who also has worked on movies and Netflix productions, is the founder and CEO of Artistic Prosperity, a local nonprofit dedicated to the economic redevelopment of disenfranchised communities through the power of the arts. Recently, he directed a production of RUR (Rossum’s Universal Robots) which can be found on the AP channel on Youtube.

Logan Tomko ’20, of Plum Borough, PA, will play Horatio. Tomko, a history major, performed in eight campus productions. He can be remembered for yelling, “Stop thief!” as the Marquis de Mascarille in Precious Damsels and returning as the Yes Man Daryl in Shakespeare in Hollywood, Wilson in Harvey, Trinculo in The Tempest, the mad Renfield in Dracula, the lonely Hermit in Young Frankenstein, and the consumptive playwright Anton Pavlovich Chekhov in Chekhov in Yalta. He was rehearsing the role of Alexandreyevich Hlestakov in The Government Inspector before the COVID-19 shutdown. He also is a member of Delta Psi Omega Honor Society.

Callum Vargo, a senior visual and performing arts major (theatre concentration) is from McKeesport, PA. He will take on three roles in Dark Hamlet: Guildenstern, Lucianus, and Gravedigger. Last year, before changing his major from Science, Vargo served on the stage crew for Young Frankenstein, and then emerged from backstage as Maxim Gorky in Chekhov in Yalta. He was rehearsing the role of Bobchinksky in The Government Inspector before the COVID-19 shutdown. Later this semester, he will present his capstone project doing stand-up comedy.

Jason Vichinsky, who portrays King Claudius/Ghost, is an alumnus of the first theatre production Schrum directed at the Penn State Hazleton campus in 1991. He graduated from Penn State in 1996 with a degree in political science and a minor in theatre, and then went on to graduate from Thomas Cooley Law School in 2001 with a juris doctorate (litigation). He served as a criminal defense trial attorney for 14 years and left the practice of law in 2015. Originally from Brooklyn, NY, Vichinsky now resides in Corning, NY. Vichinsky’s stage credits include Moliere’s The Misanthrope (1991) and Joe Orton’s What the Butler Saw (1992), both directed by Schrum; David Ives’ Sure Thing (1995); Agatha Christie’s And Then There Were None (2010); Ken Ludwig’s Moon Over Buffalo (2011); and Reginald Rose’s Twelve Angry Men (2019). He also performed in the films Among Friends (written and directed by Thomas William Harrison, 1994) and Rag Dolls and Merlot (written and directed by Christopher Yerkes, currently in post-production).

Serving as stage manager is Michele Laity, a second-year student majoring in visual and performing arts (theatre concentration) from Pittsburgh. At Pitt-Greensburg, she served as props master for Dracula and stage manager for Young Frankenstein. A 2020 recipient of the Vira I. Heinz Program for Women in Global Leadership scholarship, Laity was set to travel to Russia last summer until the pandemic interrupted travel.

Chloe Mager, a junior anthropology major from Camp Hill, PA, is the assistant stage manager. As a first- and second-year student, she served on stage crew for the Pitt-Greensburg Theatre Company. She also is a member of Delta Psi Omega Honor Society and treasurer of the Nerdfighters student club at Pitt-Greensburg.