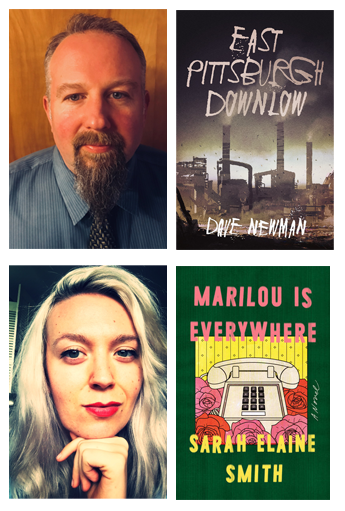 Pitt-Greensburg’s Written/Spoken Series welcomes acclaimed fiction authors Sarah Elaine Smith and Dave Newman Thursday, Feb. 20, at 7 p.m. in Powers Hall 100. The readings are free and open to the public. Student writers Madi Jarnot and Nicole Cortino will open, and a book sale and signing will be held after the readings.

Sarah Elaine Smith was born and raised in Greene County, Pennsylvania. She has studied at the Michener Center for Writers, UT-Austin (MFA, poetry); the Iowa Writers' Workshop (MFA, fiction); and Carnegie Mellon University (BA, English and Creative Writing). Her work has received support from the MacDowell Colony, the Rona Jaffe Wallace Foundation, and the Keene Prize for Literature, among others.

Smith’s first novel, Marilou Is Everywhere, was published by Riverhead Books in 2019. National Public Radio’s literary critic Michael Schaub called Marilou is Everywhere “a novel of stunning emotional intelligence. Nearly every page of the novel features a breathtaking turn of phrase; the book is almost otherworldly in its beauty and power. Fiction debuts this accomplished don't come along very often at all, and Marilou Is Everywhere proves that Smith is a writer of immense talent and rare imagination. Her voice is nothing short of angelic, and this novel reads like a miracle.”

Smith is also the author of I Live in a Hut, 2011 winner of the Cleveland State University Poetry Center's First Books prize, selected by Matthea Harvey. Smith’s work has appeared in publications like FENCE, jubilat, Tin House, and Gulf Coast, among others.

Dave Newman, an alumnus of the writing program at Pitt-Greensburg, is the author of seven books, including most recently the novel East Pittsburgh Downlow (J.New Books, 2019), which the Pittsburgh Post-Gazette called “a rollicking tale of working-class heroes and other dreamers.”

Newman’s stories, essays, and reviews have appeared in Gulf Stream, Vol. 1 Brooklyn, Belt, Smokelong Quarterly, Ambit (U.K.), Tears in the Fence (U.K), The Pittsburgh Post-Gazette, and many other places.

In his review of East Pittsburgh Downlow, Post-Gazette critic Bill O’Driscoll said, “Dave Newman has long advocated for accessible literature about everyday people. But there’s also more to East Pittsburgh Downlow than that worthy cause. It’s also about harboring the desire to change things in a world where one has very little power to do so—and, as the main character Sellick says, the solace of reaching that understanding: ‘The places to fall down are numerous and inevitable but there are moments to rise up within each collapse and enjoy success.’ East Pittsburgh Downlow is, like much of Mr. Newman’s fiction and poetry, a sooty love letter to his hometown. ‘You’ve never seen beauty until you’ve seen a place that was but still is to the people who stayed,’ his main character Selleck says.”

The Written/Spoken Series at Pitt-Greensburg brings nationally acclaimed writers to campus to read and interact with undergraduate writers. The series is made possible through the Office of Academic Affairs and the Creative and Professional Writing Program. For more information, contact Professor Lori Jakiela at 724-836-7481 or loj@pitt.edu.