For more than a decade, regional charities have been benefitting from the annual University of Pittsburgh at Greensburg Charity Basketball Game that features a student team playing against a team made up of members of the faculty and staff. This year, the United Way of Southwestern Pennsylvania will be the beneficiary of the proceeds raised at this game that will be held Wednesday, February 12, at 6 p.m. in the Chambers Hall Gymnasium. This event is open to the public at no charge.

“The students are the lead planners and organizers. They learn how to communicate as a team as well as how much work goes into planning an event of this size,” said Al Thiel, director of Student Center Operations and Student Involvement. “It’s good practice for when they leave the University and become leaders in their community.”

Thiel, who also serves as the advisor to the Student Government Association (SGA), noted, “SGA encourages each student organization to participate in this is an event because it presents a united front, and the event is embraced by the student body.”

Pitt-Greensburg student clubs and organizations put together raffle baskets that frequently match the groups’ themes. Additionally, this year, the SGA will raffle Penguins tickets, a gift card tree, plus photos signed by Pittsburgh Steeler defensive end Cameron Heyward. Tee-shirts commemorating the event are also available for sale. Businesses in the community also support the event, either through monetary donations or through goods and services that are used as raffle prizes. 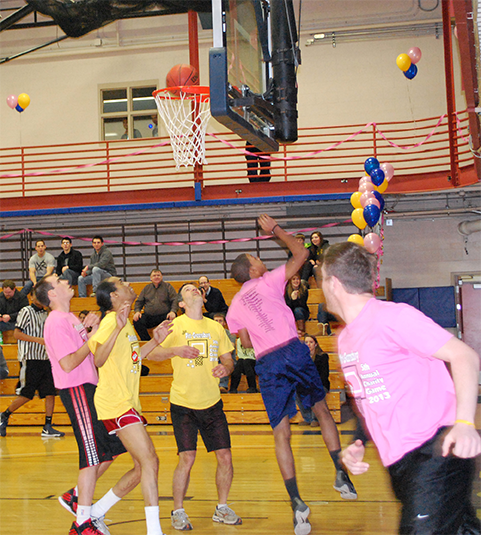 Kerlicker continued, “I’m most proud of the hard work of the SGA Senators. They plan the event and manage the event on the day of the game. All 25 members of SGA are part of the committee and provide insight into the overall preparation leading up to the game.”

Raffle sales start at noon on February 12, and individuals do not have to be present to win. A 50/50 ticket will be sold during the game with the drawing held after the game (winner does need to present for the 50/50 drawing).