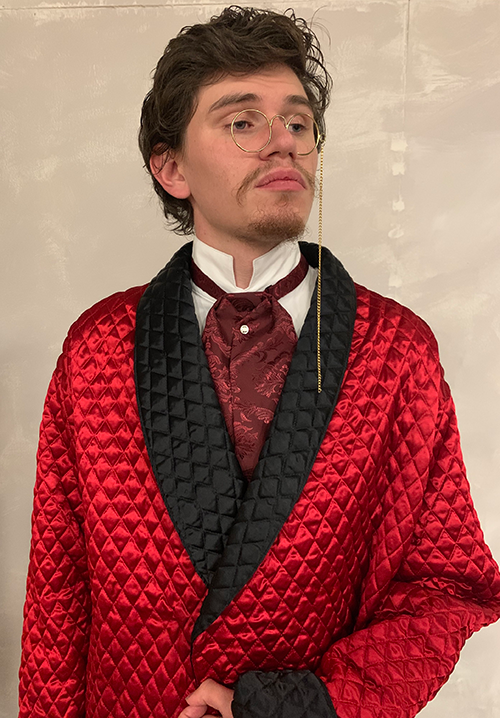 This fall, the Pitt-Greensburg Theatre Company will present Chekhov in Yalta, written by John Driver & Jeffrey Haddow. In this comedy-drama, Russian playwright Anton Chekhov is visited by the wacky members of the Moscow Art Theatre, who will do anything they can to get their hands on his newest play—before he succumbs either to love (with one of the theatre’s actresses, no less!) or to tuberculosis. Dr. Stephen Schrum, associate professor of theatre, serves as the director of this production.

“This year’s theatre performances take a cue from current events and are centered on the theme of ‘The Russians are coming! The Russians are coming!’” said Schrum. “In the two plays being produced this year by the theatre company, we see that the American and Russian people are much alike in attitudes about art and also about government corruption and confidence games.”

Schrum notes that the play deals with playwright Anton Chekhov coping with his own mortality, as he has tuberculosis, which is a death sentence during the period of time when the play takes place. Chekhov seeks to seize the moment to create art and find love. His sister, and various members of the Moscow Art Theater seek the same—each in a different way. Schrum, himself, realizes the need to seize the moment and live life to the fullest after Dianna Bourke, his wife of 30 years, passed away suddenly a year ago. Bourke served as the company’s costume designer.

“Anyone familiar with the plays of Chekhov will see bits and pieces of them included in this play,” said Schrum. “Anyone not familiar with Chekhov will see the interactions of a group of people, some in love, some caring, some uncaring, some in competition with one another, some trying to help one another. In other words: everyday life. The play is a glimpse of a particular era, the turn of the last century, when dark clouds of revolution gather on the horizon, dimming the artistic lights of the Moscow Art Theater.”

Watch for details about the spring 2020 production of the farcical The Government Inspector by Russian playwright Nikolai Gogol, in an adaptation by Jeffrey Hatcher.

Eleven Pitt-Greensburg students comprise the cast of Chekhov in Yalta.

Summer Lash (Masha Chekhov) is a senior double majoring in secondary English education and creative and professional writing. She appeared previously as Marotte in Precious Damsels, the Camera Operator in Shakespeare in Hollywood, Veta Louise Simmons in Harvey, Ariel in The Tempest, Professor Van Helsing in Dracula, and Ensemble in Young Frankenstein. From Belle Vernon, PA, Lash is president of PAS, a member of Delta Psi Omega Theater Honor Society, and the fundraising chair of Sigma Tau Delta.

Sarah Verbanick (Fyokla) is a second-year student double-majoring in criminal justice and psychology. From Connellsville, PA, Sarah has 11 years of theatrical experience, with four years on crew. She worked on the backstage crew for the Pitt-Greensburg productions of Dracula and Young Frankenstein last semester and is currently assistant stage manager in training for the spring.

Courtney Cambal (Lilina Stanislavsky), from Lower Burrell, PA, is a senior double-majoring in secondary education/English and visual and performing arts (theatre concentration). Previously she played Elizabeth in Young Frankenstein, the Maid in Dracula, Gonzalo in The Tempest and Betty Chumley in Harvey; before coming to us as a transfer, her experience included participation in her high school drama club performances of Annie Get Your Gun, A Midsummer Night’s Dream, and Chicago. She has also appeared in productions of Little Mermaid Jr., Footloose, The Wedding Singer, and Seussical the Musical. She is president of the campus chapter of Delta Psi Omega, the National Theatre Honors Society and Sigma Tau Delta, the national English honors society.

Callum Vargo (Maxim Gorky), from McKeesport, PA, is a junior majoring in visual and performing arts (theatre concentration). Last year, when he was a science major, he served on the stage crew for Young Frankenstein.

Cali Mulzet (Olga Knipper) is a junior English literature major from Phoenixville PA. She has had a variety in roles in productions of The Green Bird, Hairspray, The Mouse that Roared, Taming of the Shrew, and Great Expectations. Mulzet was also president of her high school theater guild. Last year she saved the day as Mina in Dracula, and also appeared in the Ensemble for Young Frankenstein.

Terence T. Turk II (Vladimir Nemirovich-Danchenko) is a third-year accounting major from Pittsburgh, PA. He made his theatrical debut as Francisco in The Tempest, and returned, undead, as Dracula and also as a lively member of the Dance Core in Young Frankenstein.

Logan J. Tomko (Anton Pavlovich Chekhov) is a senior history major from Plum Borough, PA. Before coming to our campus, he played the roles of The Traveler in Picasso at the Lapine Agile and Lloyd Dallas in Noises Off, and also served as the Plum High School Drama Club president. You may recall him yelling, “Stop thief!” as the Marquis de Mascarille in Precious Damsels, and returning as the Yes Man Daryl in Shakespeare in Hollywood, Wilson in Harvey, Trinculo in The Tempest, the mad Renfield in Dracula, and the lonely Hermit in Young Frankenstein.

Emily Buckel (Moskvin), from Republic, PA, is a senior creative and professional writing major (with a theatre minor). Previously, she played roles in Les Miserables, 42nd Street, Legally Blonde, and Grease. On campus, she has appeared as Desdemona in When Shakespeare’s Ladies Meet, the Script Girl in Shakespeare in Hollywood, Myrtle Mae Simmons in Harvey, Miranda in The Tempest, Vixen 2 in Dracula, for which she also served as assistant stage manager, and the Ziggy the Village Idiot in Young Frankenstein. Buckel is also a member of Delta Psi Omega Theatre Honors Society.

Finn David Caskey (Constantin Stanislavsky) is making his campus debut with this show. From St. Mary’s, PA, he is a first-year communications major (and we are trying to talk him into double-majoring with VAPA). Previously he has played the roles of Willy Wonka in Willy Wonka, Mortimer Brewster in Arsenic and Old Lace, Prince Charming in Into the Woods, The Old Man in A Christmas Story, Prince Eric in The Little Mermaid. He was also part of his school's drama club and indoor drumline and played guitar in several local bands.

Cameron Scott Collins (Ivan Alexeivich Bunin) is a senior double majoring in secondary education and history from Titusville, PA. Previously he has appeared in Pitt-Greensburg productions of Precious Damsels as Du Croisy, 15 Frogs and Counting as Ron Bickner, Dick Powell in Shakespeare in Hollywood, Lyman Sanderson, M.D. in Harvey, Ferdinand in The Tempest, Jonathan Harker in Dracula, and Frederick Frankenstein in Young Frankenstein. Prior to coming to Pitt-Greensburg, Collins had roles in Our Town, Twelve Angry Men, The Wiz, Beauty and the Beast, and Princess Whatsername. Collins is a member of the Delta Psi Omega Theater Honor Society and the treasurer for the Performing Arts Society.

Makayla Suska (Stage Manager) is from Pittsburgh, PA where she attended Barack Obama Academy. Makayla is a third-year visual and performing arts major (theatre concentration) with a minor in film studies. She has served as assistant stage manager for Harvey and as stage manager for The Tempest, Dracula, and Young Frankenstein. In high school she participated in the Obama Drama Department on stage crew for shows The Wiz, Shout! The Mod Musical, 9 to 5, and was stage manager for Sister Act. She did stage crew for the high school's annual one-act plays and the Talent Show. Her high school has received numerous awards from the Gene Kelly Awards including Best Set, Best Lighting, and Best Musical. Outside of high school theatre, she worked as the primary sound engineer for three years at her church. She is very excited and honored to be a part of the theatre program here at Pitt-Greensburg. She is also vice-president of Delta Psi Omega.

Stephen A. Schrum (Director) is an associate professor of theatre arts at Pitt-Greensburg. Having celebrated 40 years of doing theatre in December 2017, he recently became an associate member of the Stage Directors and Choreographers Society (SDC), the professional union, and was profiled in the Summer 2018 issue in the “Pre-Show/Post-Show” section of the SDC Journal. With a PhD in dramatic art from the University of California, Berkeley, Stephen is interested in digital filmmaking, virtual performance, and playwriting, and lists his current research focus as “Immersive Theatre.” As for playwriting, along with having two monologues from original plays published in anthologies, he performed his full-length monologue, Immaculate Misconceptions, a few years back, and also directed the world premiere of his musical Dog Assassin. Last summer he made several short films, including Wash Hands, Save Lives? and They’re Among Us, which are posted on the YouTube Channel stephenschrum. His podcast, Audio Chimera is now available on iTunes, GooglePlay, and Spotify. See his website MUSOFYR—pronounced “muse of fire”—at musofyr.com for more info, and check out some of his written work (plays, poetry, memoirs—including novel Watchers of the Dawn and graphic novel HellWish) at: http://www.smashwords.com/profile/view/musofyr.