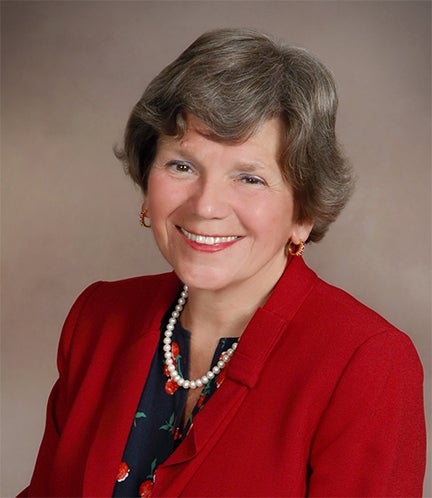 Sharon P. Smith, PhD, president of the University of Pittsburgh at Greensburg, was among the 13 college and university leaders from Allegheny and Westmoreland counties who participated in a series of 14 videos speaking out against campus sexual assault.

“We want to address the root cause, and that’s why our work with the Blackburn Center is so essential,” said Smith. “If we foster an environment where every member of the community understands that violence is not tolerable, that awareness will be carried by our students where ever they go. We want them to understand that an individual can and should make a difference, now and always.”

The public launch of the video series featuring 13 area university presidents declaring zero tolerance for abuse on campus and encouraging students to report and seek assistance occurred Monday, September 11, at the University Club (University of Pittsburgh). There college and university leaders in Allegheny and Westmoreland counties united with community organizations, advocates and state and local officials to reaffirm their commitment and report on the region’s progress in addressing campus sexual assault.

“Change starts with leadership from the top,” said Kristy Trautmann, executive director, FISA Foundation. “In Southwestern Pennsylvania, college and community leaders are stepping forward in bold new ways to work collaboratively with a focus on prevention and ensure that victims of sexual violence are met with respect and support.”

University of Pittsburgh student Maggie Kennedy, a member of the “It’s on Us” Task Force and a member of the Student Government Board Wellness Committee, concluded the program. “Education about sexual violence is incredibly important and I thank you all for the work that you do at your institutions,” said Ms. Kennedy, “but I believe it needs to start much earlier.” She continued, “The toxic entitlement to other people’s bodies and the misogyny of rape culture begins even before high school.”

To view the University Presidents Unite Against Campus Sexual Assault video series and to access Title IX resources for each of the 13 participating schools, click here.

The event and video were orchestrated by Southwest PA Says NO MORE, a growing community of organizations and individuals who are working to end domestic and sexual violence, led the project. FISA Foundation, in partnership with The Heinz Endowments and United Way of Southwestern Pennsylvania developed Southwest PA Says No More to showcase the important prevention-focused work happening in this region, and to make it easier for individuals and organizations to take action to stop gender-based violence. More than 25 organizations across the region have partnered with Southwest PA Says No More, including the Jewish Community Center of Greater Pittsburgh, YMCA of Greater Pittsburgh, and Children’s Hospital of Pittsburgh.