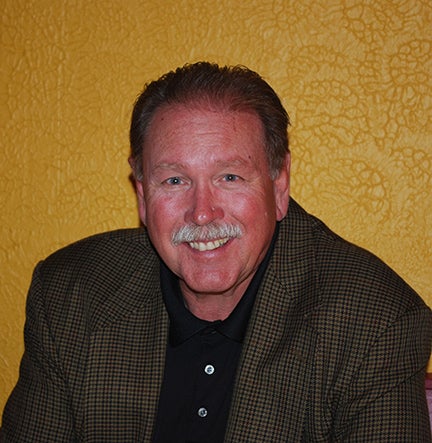 The Pitt-Greensburg Alumni Association (PGAA) will present its Volunteer of Excellence award to Thomas “Tom” M. Jollie ’72 at the Alumni Celebration Dinner to be held Saturday, October 5, at the University of Pittsburgh at Greensburg as part of Blue & Gold Celebration 2019.

The PGAA Volunteer of Excellence Award was established in 2009 to recognize alumni who volunteer their time to the PGAA and the University of Pittsburgh at Greensburg. The award honors alumni who have dedicated a significant amount of personal time to attending alumni meetings and events, working on special projects, and contributing to the overall success of both the alumni association and the University it represents.

Jollie, a native of Irwin who resides in Greensburg with his wife, Sharon, graduated from the University of Pittsburgh with a BS in mathematics. At Pitt-Greensburg, he was a member of the campus’ first official men’s basketball team. Today, he is a founding member of the Men’s Basketball Alumni Club (MBAC), serving as its treasurer, and was the driving force behind an MBAC project that resulted in the purchase of a shooting machine for the basketball teams.

“Since Tom has been elected to serve on the Alumni Board, he has selflessly donated of his time and his resources to support his alma mater,” said Harry Bowser, a member of the PGAA Board and MBAC. “Tom's efforts truly make him worthy of the Volunteer Excellence award.”

A member of the PGAA Board of Directors, Jollie sits on the events committee and regularly volunteers at PGAA events like Blue & Gold Celebration events and Mock Interview Night. An avid golfer and Pitt sports booster, he also has served on the committee for the Annual Pitt-Greensburg Golf Outing.

Jollie credits Pitt-Greensburg for his success, as well as it being a launching pad for his sister, a prosecuting attorney in Greensburg, and his brother, an insurance business owner in Irwin.

While a student in the Pitt system, Jollie volunteered, in 1971, with the Army National Guard, and served six months of active duty, which delayed his graduation until 1972. He then served six years as a member of the military police. His service centered on efforts across the state, including flood duty in Johnstown and Scranton. After graduation, he entered the insurance business in the same company as his father, but in a different town. Forty-seven years later, the T M Jollie Insurance Agency, Inc. (Mt. Pleasant) and its owner have been the recipient of numerous awards for sales and travel. Jollie also expanded his business into real estate. He designed and guided the construction of his office complex as well as buying and renting properties. He and his wife, Sharon, enjoy spending time at their second home, too.

Founded in 1963, the University of Pittsburgh at Greensburg is a publicly assisted, four-year, liberal arts college in southwestern Pennsylvania. Pitt-Greensburg offers 29 baccalaureate degree programs, including new majors in Nursing, Healthcare Management, Public Policy, and Education, as well as 24 minors and four certificate programs. With nearly 1,500 students, more than 10,000 alumni, and faculty and staff numbering 260, Pitt-Greensburg provides a vibrant, diverse community that is a dynamic model of a 21st century liberal arts education. As part of the University of Pittsburgh system, Pitt-Greensburg offers the resources of a world-renowned university combined with the individualized and immersive experiences of a small liberal arts college. Creativity and an entrepreneurial spirit permeate the campus and extend into its many collaborative projects with the Westmoreland County community. Nestled in Pennsylvania’s beautiful Laurel Highlands, the campus is surrounded by the region’s outdoor recreation venues and rich history. It is a five-minute drive from uptown Greensburg’s coffee shops, restaurants, art museums, theatres and boutiques and less than an hour’s drive from Pittsburgh.