The Joan Chambers Concert Series returns! Come join us in Campana Chapel for Voces Solis (Voices of the Sun), Pittsburgh's premiere chamber ensemble, under the direction of Dr. Ryan Keeling.

Make Peace is a musical reflection on inner and outer peace, peace for ourselves and peace for others, and the places in which we should be making peace: "if you can make peace, make peace." - David Lang

Voces Solis performs a diverse repertoire of challenging and innovative choral works. Composed of professional musicians, music educators, and experienced choristers, we are committed to providing an educational experience for our members and our audiences alike. In addition to public performances, private events, recordings, and symposiums, Voces Solis also collaborates with other arts organizations to bring the highest quality choral chamber music to the Pittsburgh area. 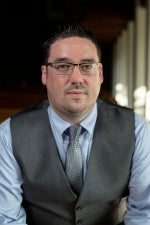 Dr. Ryan Keeling is active as a teacher, singer, and conductor in the Pittsburgh area. Ryan is Director of Choral Activities at Westminster College where he conducts the Concert Choir, Chamber Singers, and Men's Chorus and teaches classes in Diction and Choral Conducting and Artist in Residence at Christ United Methodist Church in Bethel Park. Ryan also serves in the leadership of three of Pittsburgh's premiere choral ensembles as Artistic Director of Voces Solis, Conductor of the professional women's choir Virago, and Assistant Conductor of the Mendelssohn Choir of Pittsburgh, the Pittsburgh Symphony Orchestra’s “Chorus of Choice.”

Previously, Ryan served as Music Director of OvreArts where he conducted the OvreArts Sinfonia and was the founding conductor of the OvreArts Chamber Singers. Ryan was recently Director of Choral Activities at West Liberty University, Assistant Director of Music and Worship Life at Christ United Methodist Church in Bethel Park, Conductor of Duquesne University’s Pappert Men’s Chorale, Director of Choral Music at Mt. Lebanon United Methodist church, and a Professional Core Tenor in the Mendelssohn Choir of Pittsburgh.  Ryan holds the D.M.A. degree in Conducting from West Virginia University, the M.M. degree in Choral Conducting from East Carolina University, and the B.A. degree in Music Education from West Liberty State College.

The series is named in honor of Joan Chambers, late wife of President Chambers, who was an ardent supporter and representative of Pitt‐Greensburg in the community for many years. While her interests were widespread, she especially enjoyed participating in book‐discussion groups, attending cultural events, hosting themed luncheons at her home, and spending winters in southwest Florida. The Children’s Literature Collection in Millstein Library, another of her passions, was developed and named in her honor.

Coming to Our Concerts