Launched in 2000, the Legacy Laureate program recognizes Pitt alumni who have excelled both professionally and personally and who exemplify the best in leadership qualities and commitment to the greater good for their professions, communities, and the world at large.

The University of Pittsburgh recently named Westmoreland County native and founder of the Davis Supermarket chain Robert H. Davis one of its 2013 Legacy Laureates. 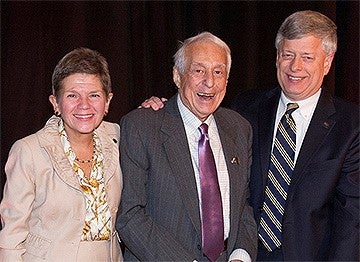 Davis received his award during a special dinner held Thursday, September 26, during the University of Pittsburgh’s Homecoming activities.

Then on October 15, Davis was recognized for this achievement by the University of Pittsburgh at Greensburg when he met with students and attended a congratulatory dinner on campus. Davis served as a member of the Pitt-Greensburg Advisory Board, including a chairman from 1983 to 1985, and is now an Emeritus member.

“Bob Davis’ life experience goes above and beyond the definition of exceptional success as set forth by the University of Pittsburgh,” said Sharon P. Smith, president of the University of Pittsburgh at Greensburg. “An outstanding representative of the ‘greatest generation,’ Bob has lived the Pitt Promise honoring the pledge to ‘contribute to the development of a caring community where compassion for others and freedom of thought and expression are valued.’  Pitt-Greensburg is grateful for the service Bob has provided to this campus and our region. He is truly deserving of the honor of being named a Legacy Laureate and we are proud to present him as a role model for our students.”

The University of Pittsburgh’s Legacy Laureate program recognizes alumni for their personal and career achievements. Legacy Laureates are individuals who have achieved exceptional success in pursuit of their life goals and who continue to inspire by their example. The goal is to recognize these individuals as living examples to Pitt students of the potential for excellence that exists within the University of Pittsburgh community, which is based on the belief, as stated by Chancellor Mark Nordenberg, that there will be no better role models for students than alumni who have been successful in their chosen fields.

Davis’s connection to the University of Pittsburgh began in 1939, after he graduated from Jeannette High School with numerous track awards. Pitt awarded him an athletic scholarship, and Davis worked a student job sweeping the steps of the Cathedral of Learning. During his college career, Davis lettered in cross country and track, serving as captain of the team as a senior. Before graduating in 1943 with a Bachelor of Arts degree in Business, he had earned Pitt’s coveted Gold Shoe Award and met his wife of 68 years, Phyllis (Levine) Davis.

Five days after graduating from Pitt, Davis reported for duty as a member of the U.S. Navy. A World War II veteran, he survived six months of Germany’s bombing of England and fought on Normandy’s Utah Beach during the June 6, 1944, D-Day invasion.

Davis returned to the United States in 1946. He and Phyllis moved to the Greensburg area, where they raised four children: James Davis, married to Marilyn; Carole Davis; Steven Davis; and Rachel Leah “Terry” Davis. At this time, Davis began working for his father’s corner grocery store, a business he expanded into the successful Davis Supermarket chain. Serving as president of the company for nearly 50 years, he received multiple national awards, including Brand Names Outstanding Food Retailer of the Year (1966).

His contributions to the region and its citizens have been manifold, including involvement with the Mental Health Association (now Mental Health America of Westmoreland County), Boy Scouts of America, and the Westmoreland Girl Scout Council. Recognized as one of the initiators of the Greensburg Project Head Start Program, he also served as president of both the Congregation Emanu-El Israel and Warren Roy Laufe B’nai Brith Greensburg Lodge.

The awards, commendations, and honors Davis has received for his service to the community are too numerous to mention in detail, but they include the Fred Funari Award of Distinction, the Israel Bond Man of the Year Award, and the Pitt-Greensburg President’s Medal for Distinguished Service.

Congressman Tim Murphy ’79 ED (R-18th Congressional District) received the prestigious University of Pittsburgh Legacy Laureate Award. The awards, announced at a special recognition dinner during Pitt’s annual Homecoming activities on Thursday, October 13, were established in 2000 to honor University of Pittsburgh alumni for their outstanding personal and professional accomplishments. It is the highest honor bestowed on University alumni.

Rep. Murphy is the third Legacy Laureate recipient to be nominated by Pitt-Greensburg, and Pitt-Greensburg remains the only regional campus to have its nominees receive this prestigious award.

Congressman Tim Murphy has devoted his career to the betterment of his fellow citizens. He spent three decades as a practicing psychologist, working at and consulting in hospitals and schools around Western Pennsylvania, where he also offered his expertise to the media. He taught at the University of Pittsburgh, where he earned his Doctor of Philosophy degree from the School of Education in 1979.

In 1996, Murphy was elected to the Pennsylvania State Senate, where, a year later, he authored the Commonwealth’s historic Patients’ Bill of Rights. In 2002, Murphy was elected to the U.S. Congress, where he is serving his fifth term representing the 18th District of Pennsylvania. He is one of only a few representatives with a background in health care and leads advocacy for increasing health care affordability and accessibility for all Americans, authoring legislation acts and books in an effort to advance knowledge and understanding of mental health.

Murphy joined the Navy Reserve Medical Service Corps in 2009 in order to work with wounded warriors with traumatic brain injury and post-traumatic stress disorder. His commitment to mental health treatment and practice was recognized by the American Psychological Association in 2005, when it awarded Murphy its Outstanding Leadership Award. Murphy also serves on the boards of Westmoreland Community Action and the University of Pittsburgh Institute of Politics.

The Honorable John J. Driscoll LAW ’66 LLB received the prestigious University of Pittsburgh Legacy Laureate Award at a special recognition dinner during Pitt’s annual Homecoming activities on Thursday, October 28. This award was established in 2000 to honor University of Pittsburgh alumni for their outstanding personal and professional accomplishments.

Judge Driscoll’s contributions to the overall good of the community extend from Pitt-Greensburg’s own campus to the national level. At Pitt-Greensburg, he is a valued member of the Advisory Board while providing time, talent, and financial support to many of the University’s projects and programs. Locally, he serves as Judge for the Westmoreland County Court of Common Pleas, while providing support to a number of non-profit organizations through his presence and service. Nationally, his service in the US Navy from 1966 to 1970 resulted in several commendations. He continues to work to improve national-scale legislation and has served as chairman of the Supreme Court Criminal Procedural Rules Committee.

“We are pleased that Judge Driscoll has received this award," said Dr. Sharon P. Smith, president of the University of Pittsburgh at Greensburg. "He embodies the values we treasure in the Pitt pledge: civility, integrity, mutual respect, and concern for others.”

Judge Driscoll becomes the second alumnus with close ties to the Pitt-Greensburg campus to receive the Legacy Laureate. Gary Amelio A&S ’78 LAW ’81 received the award in 2007. Pitt-Greensburg is proud to note that it is the only regional campus to have nominated alumni who have gone on to receive this distinguished award.