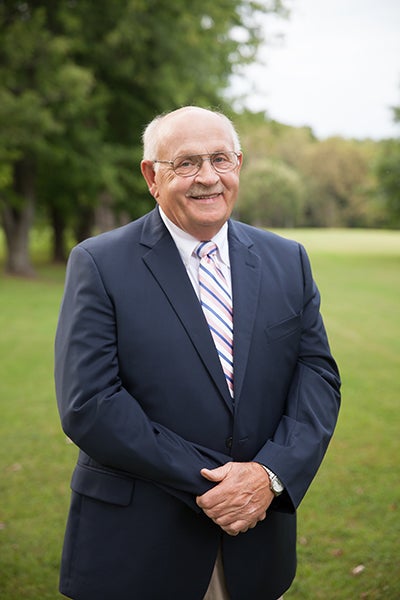 ​Harry P. Bowser ’72 is the recipient of the Pitt-Greensburg Alumni Association’s (PGAA) Alumnus of Distinction Award. This year, a virtual awards recognition ceremony will be held Saturday, October 3, as part of Blue & Gold Celebration 2020 at the University of Pittsburgh at Greensburg.

The PGAA Alumnus of Distinction Award acknowledges excellence among alumni of Pitt-Greensburg. Candidates are evaluated on their outstanding level of professional achievement, service to the community, service to the University of Pittsburgh, special recognition or honors, and any other special efforts or success. It is the highest honor given by the PGAA to an individual alumnus/alumna annually. Visit https://www.greensburg.pitt.edu/alumni/awards on October 3 to view the ceremony.

“For nearly 50 years, Harry’s tireless effort, energy, and passion to support and grow Pitt Greensburg have been second to none, said Robert P. Najim ’93, MBA, CPA, president of the Pitt-Greensburg Alumni Association Board of Directors. “Harry is a teacher, coach, and community leader that the University is lucky to have as an advocate, representative, and ambassador.”

Bowser graduated from the University of Pittsburgh in 1972 with degrees in secondary education and history after attending the University of Pittsburgh at Greensburg from 1968 through 1970. After graduation, he completed his term of service with the Pennsylvania National Guard and was then hired by the Southmoreland School District. There he taught social studies to grades seven through 12 for 35 years and served as head of the Social Studies Department. During that time, he served as the junior class sponsor, senior class sponsor, Prom sponsor, as well as having planned, organized, and chaperoned a student trip to England and France. Bowser is a two-time recipient of a certificate of honor from the St. Vincent College Great Teacher Recognition Program and was a five-time recipient of a Who’s Who Among America’s Teachers designation.

In 2013, he joined the Pitt-Greensburg coaching staff as a volunteer assistant men’s basketball coach and character coach through the Fellowship of Christian Athletes. Bowser initiated “character sessions” where members of the men’s basketball team receive instruction on the development of a positive attitude. These sessions also provided team members with an outlet to share their goals, frustrations, and friendship in a way that has a positive effect on both the team and the individuals.

The recipient of the 2016 Volunteer Excellence Award, Bowser also serves on the board of the Pitt-Greensburg Alumni Association (PGAA) and is one of the founding members of the Pitt-Greensburg Men’s Basketball Alumni Club (MBAC). He regularly contributes to the MBAC newsletter and its organization. Bowser also serves on the PGAA board’s Events Committee and has volunteered on Freshman Move-In day to help welcome first-year students to campus. He also served as the Alumni Marshal at the 2017 Commencement.

“I have never done anything for the sole purpose of winning an award,” said Bowser. “I initiated these projects and participated in these activities because they were things that should be done. Winning this award is both humbling and gratifying.”

Bowser’s work continues in the community, as well, where he volunteers with the Fairview Church of God in its Soup Kitchen and doing lawn work. He also volunteered with the Buchanan Church of God Soup Kitchen and helped with its vacation Bible school. He was recognized for donating more than 19 gross of toy frogs to promote the belief that one should “Fully Rely On God,” too.

Bowser and his wife, Karon, have two sons, Adam ’03 and Ryan. A resident of Alverton, PA, Bowser notes that he enjoys spending time with his granddaughters Alexis and Mikayla, and traveling.

Founded in 1963, the University of Pittsburgh at Greensburg is a publicly assisted, four-year, liberal arts college in southwestern Pennsylvania. Pitt-Greensburg offers 30 baccalaureate degree programs, including new majors in data analytics, nursing, healthcare management, public policy, and education, as well as 26 minors and four certificate programs. With nearly 1,500 students, more than 10,000 alumni, and faculty and staff numbering 260, Pitt-Greensburg provides a vibrant, diverse community that is a dynamic model of a 21st-century liberal arts education. As part of the University of Pittsburgh system, Pitt-Greensburg offers the resources of a world-renowned university combined with the individualized and immersive experiences of a small liberal arts college. Creativity and an entrepreneurial spirit permeate the campus and extend into its many collaborative projects with the Westmoreland County community. Nestled in Pennsylvania’s beautiful Laurel Highlands, the campus is surrounded by the region’s outdoor recreation venues and rich history. It is a five-minute drive from uptown Greensburg and less than an hour’s drive from Pittsburgh.