The Pitt-Greensburg Alumni Association Student Community Service Award is a campus service award that is given to a Pitt-Greensburg student who best exemplifies the spirit of volunteerism through participation in a student organization in his or her community. A certificate of recognition is presented at the Student Leadership Recognition Ceremony and Alumni Leadership Meeting each spring. Students may be awarded this distinction only once.

A nominee must be an active member in good standing of a registered University organization. It is expected that the student make contributions that help to advance the organization towards its goal(s). The student may be nominated by more than one organization. All Pitt-Greensburg students are notified that they may submit nominations for themselves or others for the Student Community Service Award. The nominee must have a cumulative QPA of at least 2.50. The nominee’s cumulative QPA as reflected in the submitted unofficial transcripts is also considered in determining the recipients for this award. The nominee must also be a currently registered Pitt-Greensburg student with a minimum of 24 credits from Pitt-Greensburg.

The 2021 Student Community Service Award nomination link is closed.  The 2021 recipient was announced during Leadership on the Lawn.  Thank you for participating!

Mya Cole ’21 is the recipient of the PGAA Community Service Award.  “She has already made this world a better place,” is a quote from one of Cole’s nominators that summarizes why she received this award. Cole serves as president of three campus organizations: Habitat for Humanity, Beta Beta Beta, and Gamma Sigma Epsilon. She also serves as secretary of the Student Alumni Association, is the House Representative for Pi Gamma Mu, and is a general member of Psi Chi and the Student Activities Board--all while successfully completing a biology major with minors in chemistry and psychology as well as completing the requirement for Pitt-Greensburg Experience More (GEM) as a junior. During her four years at Pitt-Greensburg, Cole regularly participated in the Fall/Spring Into the Streets community service events, the Martin Luther King Jr. Days of Service, the Jeannette Head Start Christmas Party preparations, the Juvenile Diabetes Research Foundation Walk, Relay for Life, and Walk a Mile in Her Shoes. Cole regularly participates in the Habitat for Humanity local and spring break house building projects and volunteers at her local Habitat for Humanity Store. She also teaches dance at her local dance studio and cleans at an animal shelter in Pittsburgh. “She . . . puts others ahead of herself all the time.” 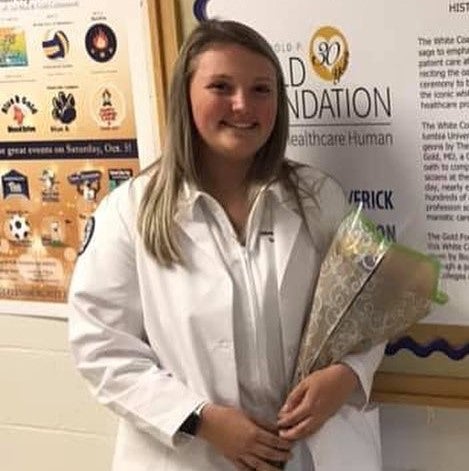 Nursing student Emily Halsted ’22 was named the PGAA's 2020 Student Community Leadership Award recipient in recognition of her service to the campus and community.  Emily founded the Student Nurses Association on campus, helped establish the Pitt-Greensburg chapter of the nursing honor society Sigma Theta Tau, participated in The Power of Nursing video, planned a campus-wide health fair, brought therapy dogs and speakers to campus, meets with prospective students and is assisting in the development of a nursing mentor program.  Through Habitat for Humanity, she participated in local home builds and attended two alternative spring break trips in Louisiana and North Carolina.  As a Circle K member, she made treats for Animal Friends, held a Christmas party at Clelian Heights, and made meals for families at Ronald McDonald House.  She has also organized fundraisers, participated in Into the Streets and serves as a greeter at Word of Life Church. A former peer leader and current community assistant, she is employed as a technical partner at Westmoreland Hospital.

Jenna Schultz ’20, a biological sciences major, was presented the PGAA Student Community Leadership Award, in recognition of her multi-faceted service to the campus and community. With plans to join the Peace Corps after graduation, Schultz complements her classroom experiences through service. As a member of the Outdoor Adventure and Community Service (OACS) Club, she has participated in campus clean ups and Mt. Pleasant road clean ups. She also volunteered for the MLK Day of Service, Pitt Make a Difference Day, the JDRF walk, the Relay for Life, and Walk a Mile in Her Shoes. A participant in two Habitat for Humanity (HFH) Collegiate Challenge Spring Break trips, Schultz traveled to Mississippi to rehab houses damaged from hurricanes and, this past spring, traveled to North Carolina to rebuild homes. A regular volunteer in the community, she has served at animal shelters and participated in food drives with local churches. Schultz, a Science Learning Community (SLC) Scholar, is a Dean’s List student who carries a full-credit load while still maintaining her community service. She also serves as the Beta Beta Beta Honor Society historian, the OACS treasurer, and was selected a Da Vinci Scholar for her academic success, leadership, and service. 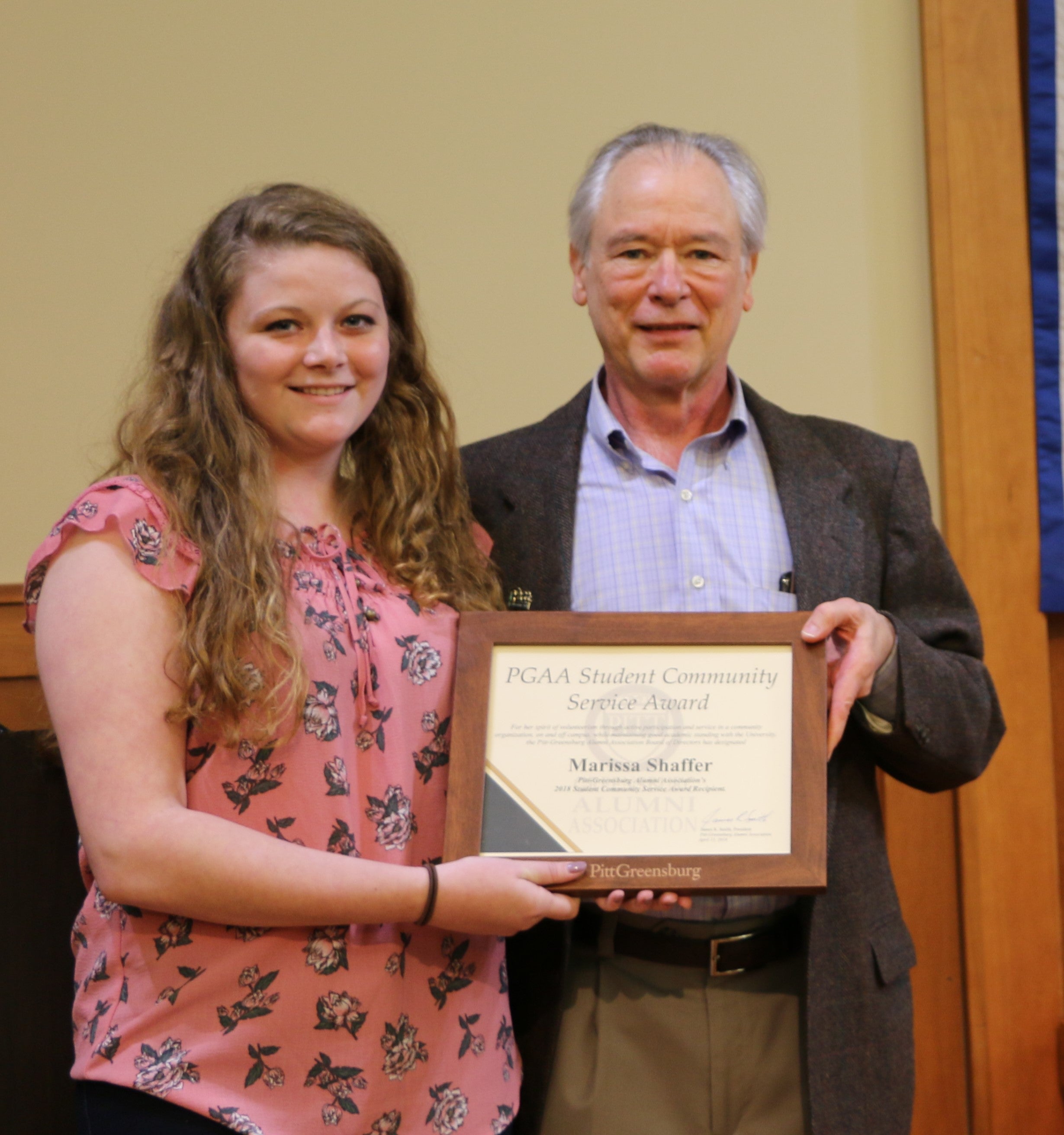 Marissa Shaffer '18, a Chemistry major, was presented with the PGAA Student Community Service Award in recognition of her strong commitment to serving the campus and the community. A Community Assistant (CA) for three years, has she received the Programmer of the Year award and the CA of the Year award for her ongoing efforts to help resident students find their niches on campus as well as building community and creatively relieving stress. She also is active in the campus chapter of Habitat for Humanity (HFH) and the Outdoor Adventure & Community Service (OACS) living community. As a participant in HFH Alternative Spring Break, she has logged more than 150 service hours over the past four years serving those less fortunate in other states, while also helping to plan and lead the trips for her fellow students. This past year, she served as the chapter’s president and continued her commitment to local build projects and volunteering at the HFH ReStore on Saturday afternoons. Over the past four years, she also has regularly volunteered at more than 10 service projects, including Pitt-Greensburg Relay for Life, JDRF Walk for a Cure, Pitt-Greensburg Into the Streets, Pitt Make a Difference Day, Feeding the Spirit Soup Kitchen, Westmoreland County Food Bank, and the Westmoreland Humane Society. 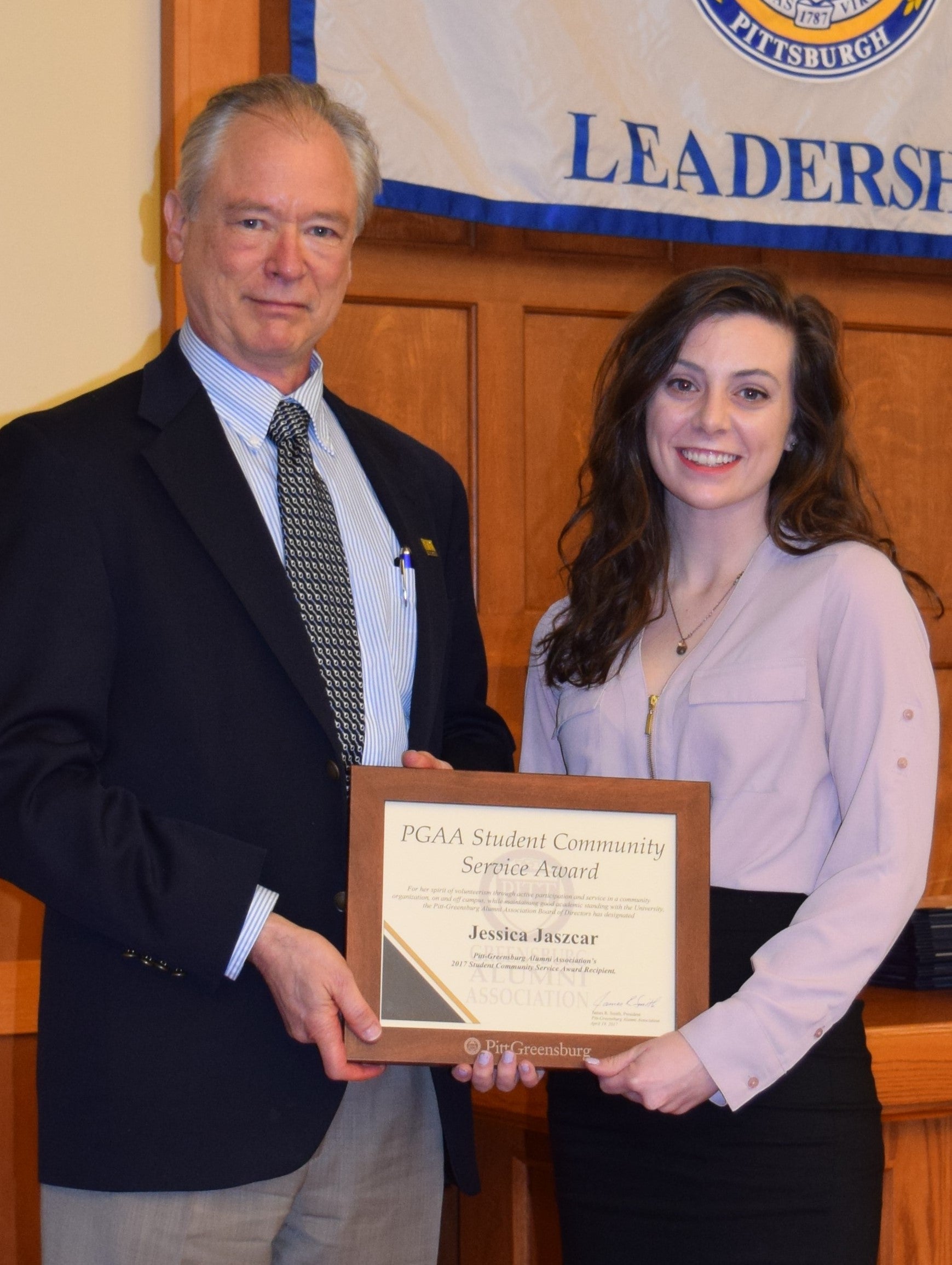 Jessica Jaszcar ’17, a Biological Science major, was presented with the PGAA Student Community Service Award in recognition of her multifaceted community service to the campus and community. In addition to serving as a Peer Leader, she served as president of the campus’ Circle K Club and expanded the club’s reach into the community by working with Big Brothers Big Sisters, the Welcome Home Shelter, the Juvenile Diabetes Research Foundation (local chapter), and Clelian Heights School for Exceptional Children. The Student Government Association (SGA) presented its “Outstanding Service Project” award to her after she organized the campus’ first-ever Circle K Community Easter Egg Hunt, now in its second year. This spring, she played an instrumental role on the committee implementing Pitt-Greensburg’s own American Cancer Society Relay for Life event, which raised more than $11,000. The recipient of the Kiwanis Club of Greensburg’s 2016 Circle K Award, she also received the SGA Ridilla Leadership Scholarship and the 2016 Dean’s Award for Outstanding Leadership. Her service extends to other campus projects, including last year’s SPSEA revitalization project at a Jeannette elementary school, as well as being a regular participant in the campus’ “Into the Streets” community service activities.

Bryan Edwards ’16 is the recipient of the 2016 PGAA Student Community Service Award. An Education major, Edwards’s community service culminated in April with his organization of the Outreach to Teach Beautification Project at Jeannette McKee K-8 Middle School. Working with more than $20,000 in funding that he helped to raise, Bryan organized more than 100 students from Pitt-Greensburg and nearby schools to paint murals, add color to the cafeteria, create a parent center at the school, renovate the teachers lounge, plant flowers, modernize the playground, and supply play equipment for Jeannette’s afterschool program. As business manager of the campus Student Pennsylvania State Education Association (SPSEA) for the past two years, he was instrumental in identifying ways to assist Pitt-Greensburg students in attending the national SPSEA Annual Conference. This year, as president of the Regional SPSEA group, he organized more regional events than have occurred in the past five years combined. Edwards volunteers in programs benefitting local schools and their students, including Jingle Jam, Hallow-Boo Carnival, SOPA Hoops Saturday, Big Brothers/Big Sisters Lunch Buddies, WQED PBS Kids Write Kickoff Party on campus, and NHS Autism Dance. He also served as a Commuter Mentor. 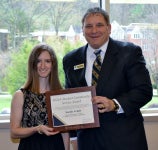 Sarah Arndt ’15 is the recipient of the 2015 PGAA Community Service Award. Last year, Arndt’s ongoing commitment to serving others earned her the OACS Community Service Award and a $3,000 scholarship from the Westmoreland Croquet Club. She credits community service with making her a better person and leader. A biology major, Arndt regularly participates in the campus Into the Streets events and is active in Habitat for Humanity (HFH) as well the Outdoor Adventure and Community Service (OACS) living community. She has served as the Habitat for Humanity (HFH) fundraising chair (spring 2014), vice president (2014-2015), and student leader of the 2015 HFH Alternative Spring Break Trip that took 30 volunteers to Pittsboro, NC, to build houses for those in need. An active member of OACS for the past three years, she participates in its service projects, including the JDRF Walk where, for the past two years, she volunteered and was a Pitt-Greensburg Team walker. Arndt will continue her education and service in Pitt’s Master of Occupational Therapy Program where she will learn how to help those with disabilities and other special needs to lead normal lives again.

Huong Vo is the recipient of the 2014 PGAA Community Service Award. Described as one of the “biggest cheerleaders for community service on campus,” Vo enjoys making a difference in others’ lives and is always encouraging those around her to do the same. She leads by example, helping to facilitate the 2012, 2013, and 2014 Alternative Spring Break trips for Pitt-Greensburg’s chapter of Habitat for Humanity (HFH). An executive board member of the HFH chapter, she has served as secretary and fundraising chair. Additionally, Vo was a regular volunteer at the former Central Westmoreland HFH ReStore and participates in “Act, Speak, Build Week” to promote HFH and community service locally. A regular participant in the campus “Into the Streets” community service initiative, she was instrumental in implementing the past two Student-Government-Association-sponsored Charity Basketball games, which have raised more than $10,000 in the past two years for Jamie’s Dream Team. Vo, a Biology major, is president of the Student Government Association (SGA) Senate, vice chair of Academic Village Senate, an International Student Mentor, and a work-study for the Academic Village coordinator’s office. She also is past president of Resident Student Council.

Kendra Custer is the recipient of the 2013 PGAA Community Service Award. Kendra has recently participated with Habitat For Humanity with their spring break trip. She also volunteers at Children's Hospital. Every month she volunteers a Saturday morning to help at the Saint Vincent dePaul Food Pantry. She also has volunteered with Westmoreland County Parks and Recreation, Animal Friends of Westmoreland County, and American Red Cross. Kendra is a student tutor, vice president of Gamma Sigma Epsilon, judicial board member, village senate member, peer leader, and academic village member.

Scott Szypulski is the recipient of the 2012 PGAA Community Service Award. Scott has a long list of involvement in the community, much of which has been through Student Government.  He has been instrumental in helping to plan SGA community service projects such as the annual Charity Basketball Game, which brings in money for a local agency each year (ARC of Westmoreland last year and Jamie's Dream Team this year). Scott is a regular participant in the annual "Into the Streets."  He has volunteered with Westmoreland Cleanways, the Theatre Factory in Trafford, and Wildlife Works. This year, Scott was also 1 of 15 students who attended Habitat for Humanity's alternative Spring Break trip to Rocky Mount, North Carolina.  Scott gave up his spring break to attend this trip and help work on two homes for two different families.