PLEASE NOTE: The University of Pittsburgh at Greensburg is closed to public access until further notice, and all building entrances are currently locked. Only essential facilities and police personnel are present. Keep informed with ongoing COVID-19 updates >>

The Pitt-Greensburg Alumni Association (PGAA) is currently accepting nominations for the 2020 Young Alumni Leadership Award until July 6, 2020. Complete the form below to submit a nomination. 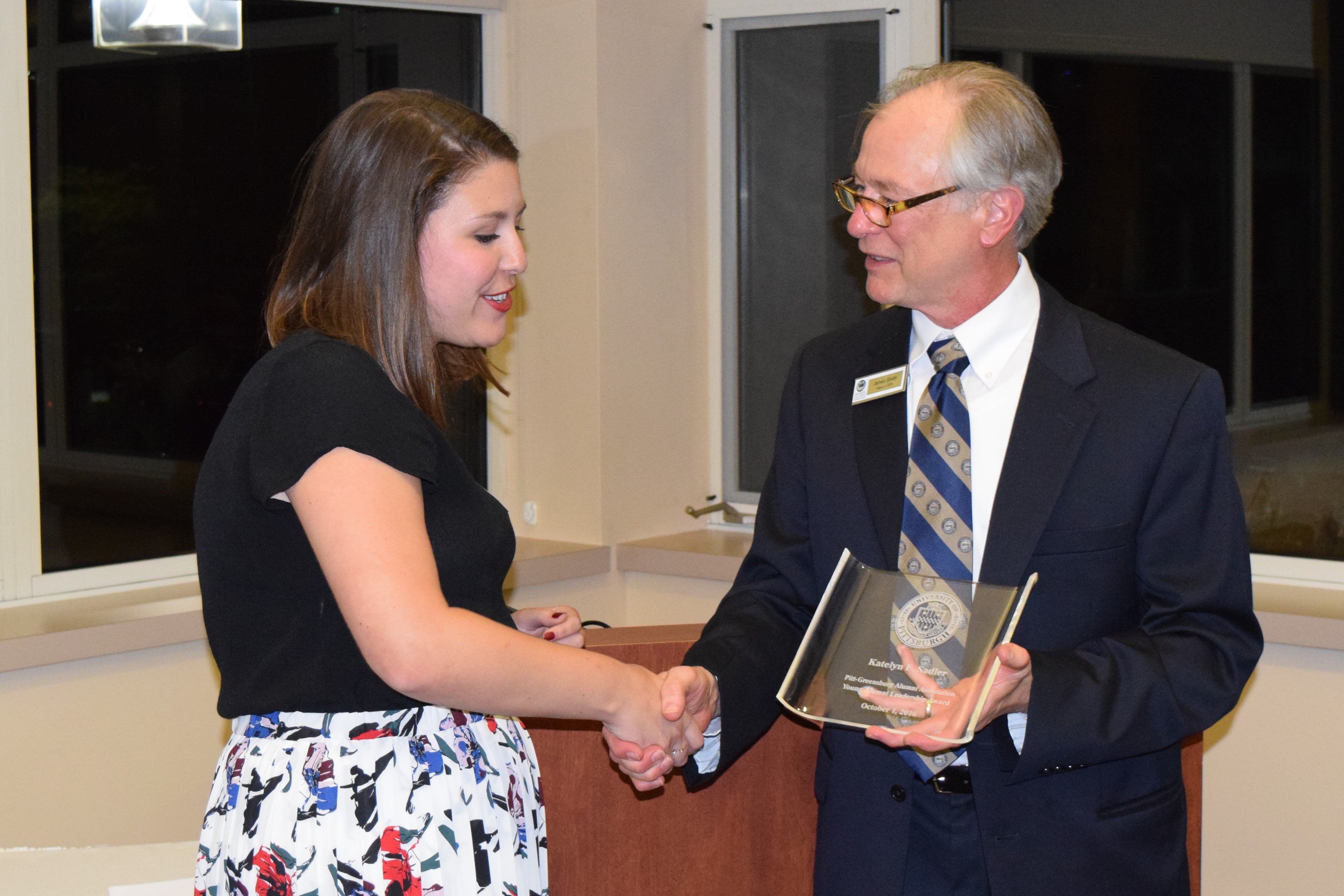 The Young Alumni Leadership Award was created to recognize and honor Pitt-Greensburg young alumni, ages 35 and under, for their accomplishments and service. The winners of the award have distinguished themselves as a leader among their peers and in their profession, community, and/or the University.

The recipient is requested to receive the honor in person by attending the Alumni Celebration Dinner on campus during Blue and Gold Weekend in October. 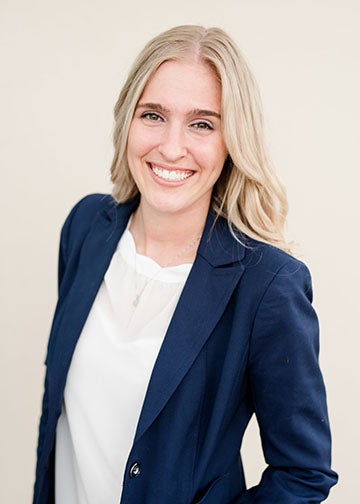 The Pitt-Greensburg Alumni Association (PGAA) will presented its Young Alumni Leadership Award to Cayla Ray, DMD ’14 at the Alumni Celebration Dinner on Saturday, October 5, at the University of Pittsburgh at Greensburg as part of Blue & Gold Weekend: Homecoming 2019.

Ray, a native of Derry, PA, graduated with a biological science major and a minor in psychology from Pitt-Greensburg in 2014. She then went on to earn a doctor of dental medicine and a certificate in dental public health from the Arizona School of Dentistry & Oral Health (ASDOH) at A.T. Still University (Mesa, AZ) and is currently serving her pediatric dental residency at Primary Children’s Hospital in Salt Lake City, UT.

While at Pitt-Greensburg, Ray was mentored by Olivia Long, PhD, associate professor of biochemistry. As an undergraduate, Ray’s research project and presentation, “The Investigation of Oral Hygiene, Dietary Habits, and Microbial Diversity Among Undergraduate Students,” was awarded first place among undergraduate students at the Allegheny Branch of the American Society for Microbiology, Pennsylvania. As an undergraduate, she worked with a local pediatric dentist to research “The Use of Fluoride Among At-Risk Pediatric Populations.” Ray was named an NCAA Woman of the Year (2015) in recognition of her outstanding community service and grades within the NCAA Division III and earned Pitt-Greensburg’s “Female Scholar-Athlete of the Year” recognition.

Ray’s leadership abilities were evident at Pitt-Greensburg where she co-founded the campus’ Pre-Health Committee, developed unique guidebooks for entrance into various health programs, and organized study groups for various admissions tests (MCAT, DAT, and GRE). She also served as a Commuter Mentor, helping non-resident freshmen students acclimate to their first year of college, as well as serving as president and vice president of the campus chapter of Beta, Beta, Beta, the national biological science honor society. She was a regular volunteer at The End Hunger Café, posting more than 400 volunteer hours, serving food, creating a bimonthly clothing closet, and organizing a back-to-school fundraiser for three under-served families.

Ray’s hard work and dedication continued to be recognized at A.T. Still University where she received the Tami Hunger Award (2019) for most community service at ASDOH in four years; the ADA Samuel D. Harris Fund for Children’s Dental Health Grant (2016-2017); and was a nominee and scholarship recipient from the Dental Trade Alliance (2017).

At ASDOH, she was a general student member of the American Academy of Pediatric Dentistry and served as the community service committee coordinator for the local chapter of the American Association of Public Health Dentistry. Her commitment to community service led her to found and serve as president of the ASDOH chapter of Students United with America’s Toothfairy (SUAT). Under her leadership, the organization held an Oral Cancer Walk, mobilized resources to provide dental education and supplies to parents and children through a teen outreach pregnancy center, organized a Day in the life a Dentist Educational event, and provided oral health instruction and dental supplies to children with hearing impairments during the Read to Me at UMOM and E.A.R. Day. 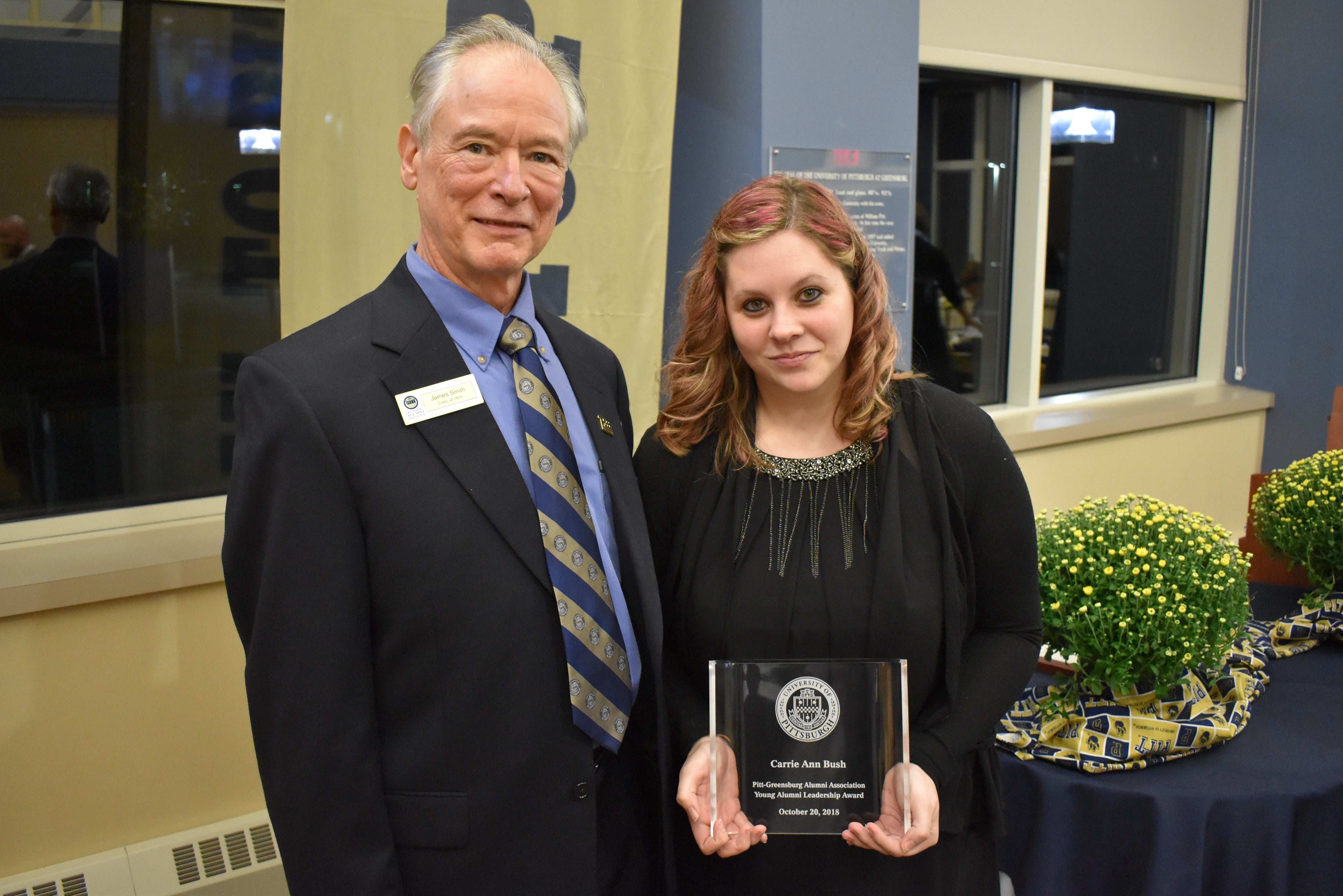 The Pitt-Greensburg Alumni Association (PGAA) will presented its Young Alumni Leadership Award to Carrie Ann Bush ’14 at the Alumni Celebration Dinner on Saturday, October 20, at the University of Pittsburgh at Greensburg as part of Blue & Gold Weekend: Homecoming 2018.

A resident of Greensburg, Bush is employed by W.N. Tuscano Agency where she is a personal lines underwriter and licensed by the Commonwealth of Pennsylvania in property and casualty, accident and health, and surplus lines. She recently earned her associate of sales from the United States Liability Insurance (USLI) University. Prior to becoming a personal lines underwriter, Bush served as a personal lines assistant for three years. Her other professional development has focused on autism, ADHD, women in leadership, and leadership. Prior to entering the field of insurance, Bush worked as a young toddler assistant teacher with Today’s Learning Childcare (Greensburg, PA).

Bush graduated from Pitt-Greensburg with a BS in psychology and a minor in history. She also completed Pitt-Greensburg’s certificate in children’s literature. While a student, Bush was active as a Peer Leader, Commuter Mentor, research assistant, Judicial Board member, and as secretary of Psi Chi, the psychology honor society. She also was a student worker, an Early College Experience tutor, and a Quest career camp counselor. She collaborated on and co-published “Experiences with God and Religious Coping,” a piece she co-presented at the Laurel Highlands Undergraduate Psychology Conference (Greensburg, PA) and at the Association for Psychological Science Annual Convention (San Francisco, CA).

Bush’s commitment to community service is evident through her participation, as a student, in Big Brothers Big Sisters Lunch Buddies and After-School Tutoring program. That commitment continues as an alumna through her service as a member of the PGAA board of directors, serving on the Events committee, and actively participating in PGAA-sponsored activities like Homecoming, the annual Pitt Send Off (for incoming students), Pitt-Greensburg at PNC park, and the annual Holiday Wine Tasting. Plus, she serves as a judge for the PGAA resume contest that helps students to prepare for their careers after graduation. Bush also serves on her employer’s Charity Committee. 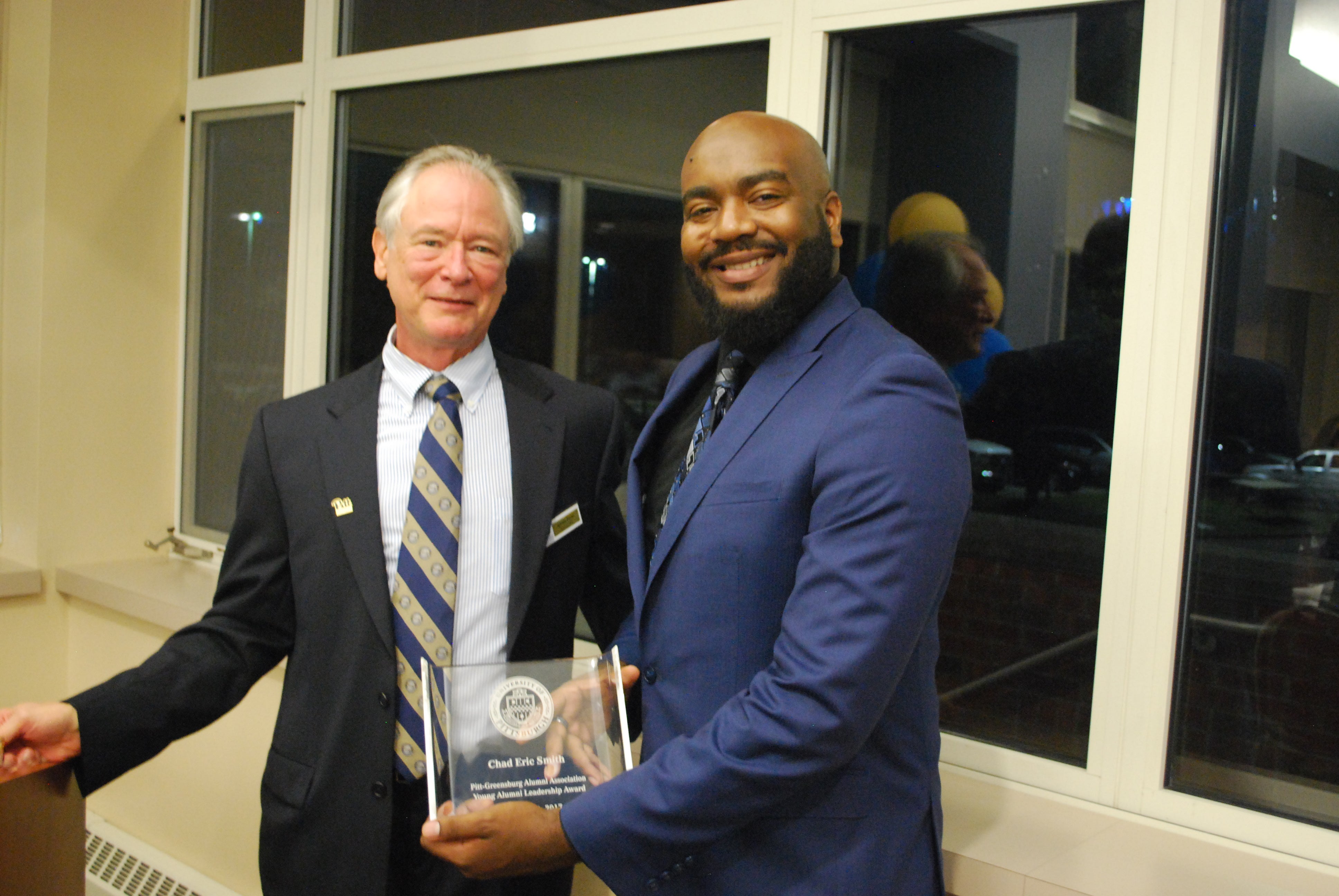 Smith graduated from Pitt-Greensburg with a BS in psychology in 2008. He is a musician, writer, film director, activist, and an award-winning actor.

His work educating others about how to end sexual violence began at Pitt-Greensburg. Partnering with the Blackburn Center, Westmoreland County’s only anti-violence agency, he founded the Men Against Sexual Violence club on campus. Smith currently works as a consultant for the national non-profit, Men Can Stop Rape.

Upon graduation, he worked as a Pitt-Greensburg Admissions Counselor and continued to pursue his interest in the arts, playing a variety of characters in community theaters in and around Pittsburgh. The Pittsburgh Chapter of the African American Council on the Arts awarded him two Onyx awards (2010).

In 2011, Smith served as a college advisor at high schools within the District of Columbia Public and Public Charter school system. Upon returning to his hometown of Washington, DC, Smith has continued to act in independent films, web dramas, and television.

His current work includes starring in Counselor (2015), a YouTube web drama, for which he received a 2016 IndieCapitol Award nomination, and making his national television debut in the TV One season finale of For My Man. Smith co-wrote and starred in his film directorial debut Dark Therapy (2014), for which he received the TIVA-DC Gold Peer Award. In 2015, he co-produced and composed the original score for the silent short film #SeeTheBoy, and recently premiered his short psychological drama Rumination at the Reel Independent Film Extravaganza. He continues to act in leading, supporting, and featured roles. 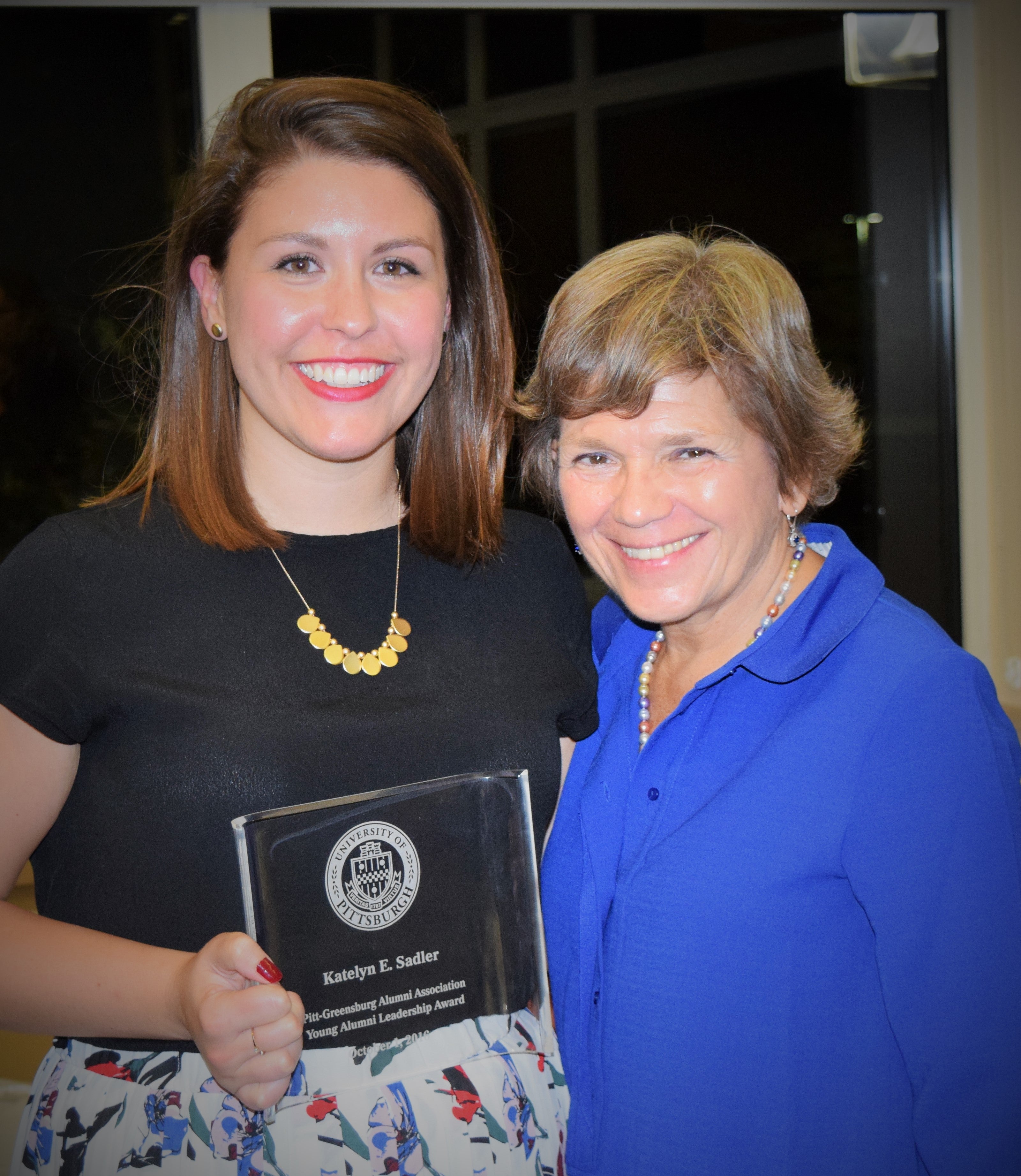 The Pitt-Greensburg Alumni Association (PGAA) presented its first Young Alumni Leadership Award to Katelyn E. Sadler ’11 at its Alumni Celebration Dinner on Saturday, October 1, at the University of Pittsburgh at Greensburg as part of Blue & Gold Weekend: Homecoming 2016.

Sadler, a graduate of Hempfield Township High School who now lives in Pittsburgh, graduated summa cum laude and Senior of the Year from Pitt-Greensburg where she earned a BS in biological science and a minor in chemistry. At Pitt-Greensburg, Sadler served as both a Resident Assistant and Peer Leader in addition to being actively involved in other campus organizations. In the classroom, she developed a love for science that led her to completing an undergraduate research project. Under the supervision of Kristina Pazehoski, PhD, then a member the Pitt-Greensburg faculty, Sadler studied biochemical properties of proteins involved in circadian rhythms. During this time, she also found a passion for undergraduate teaching by serving as a teaching assistant for molecular genetics lab and a tutor for the Learning Resource Center. Her interests in scientific research and teaching led her to pursue a Ph.D. in biological sciences at Duquesne University.

“Kate graduated from Pitt-Greensburg with a long list of accomplishments, so we knew she was destined for success,” said Sharon P. Smith, PhD, president of Pitt-Greensburg. “We are extremely proud of everything that she has accomplished during the past five years and are thrilled that she began her lifelong journey of discovery through research here at our campus.  We know that she is only at the beginning of the contributions she will be making as a member of the science community. Kate is the first recipient of the PGAA Young Alumni Leadership Award, and we couldn’t be more proud for her to represent the young alumni in this capacity.”

Currently in her sixth year of graduate school at Duquesne University, she is engaged in research, teaching, and service. Working with Benedict Kolber, PhD, assistant professor of biological sciences, Sadler is investigating the role of the brain in bladder pain processing. Her work, which has been published in six peer-reviewed journal articles, has also been presented at local, national, and international meetings. Most recently, she won best presentation at the American Pain Society meeting for basic science and clinical research. This is in addition to numerous other travel and poster presentation awards. Most notably, Sadler was the first graduate student at Duquesne to receive the Ruth L. Kirschstein National Research Service Award from the National Institutes of Health. The award has provided $40,000 annually to fund her research for the past three years. She also received the Bayer School for Natural and Environmental Sciences Award for Graduate Research Excellence and The American Pain Society Young Investigator Travel Award.

Sadler served as a graduate teaching assistant for five semesters, earning the Basic and Advanced Certificates of University Teaching offered through Duquesne’s Center for Teaching Excellence. A mentor to eight undergraduate students working in the Kolber Lab, she is also active in department and university organizations. This includes serving as the president and faculty meeting representative for the Graduate Student Organization of the Biological Sciences. She also volunteers as a judge for the Pennsylvania Junior Academy of Sciences and Habitat for Humanity Kid’s Triathlon.

Sadler is defending her doctoral dissertation this fall. After which, she will start a post-doctoral fellowship at the Medical College of Wisconsin studying sickle cell pain in the laboratory of Cheryl Stucky, PhD, professor of cell biology, neurobiology, and anatomy and director of the neuroscience doctoral program.