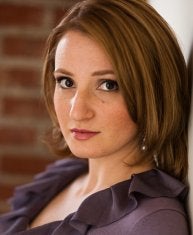 Acclaimed soprano Julie Wyma will visit the University of Pittsburgh at Greensburg as part of the Joan Chambers Concert Series, on Friday, October 11. The performance will begin at 7:30 p.m. in the Mary Lou Campana Chapel and Lecture Center (150 Finoli Drive, Greensburg, PA 15601). This performance is free and open to the public.

Their program, expected to run about an hour in length (including the intermission) and will feature a variety of music. Wyma will open with three pieces by composer Juliana Hall, followed by Jonathan Stinson’s Goethe Lieder (2-3). She’ll then perform two songs from the AIDS Quilt Songbook and Vartan Aghababian’s Emily Dickinson’s songs: The Goblin Bee and The Skies Can’t Keep Their Secret. The performance will continue with Paul Boweles’ Quatro Canciones de Frederico Lorca, Lori Laitman’s Four Dickinson Songs: Will There Really Be A Morning?, I’m Nobody, and If I…, as well as four songs by Black American composers.

“My inspiration for this program was actually the students themselves,” said Wyma when asked about the program she is choosing to perform. “As music students, we all have to give multiple recitals, which also means programming multiple recitals. There is so much great vocal music out there, and because it’s so important to study the great historic composers,” she paused to reference the standard recital fare of Mozart, Brahms, Schumann, etc., and then continued, “it is sometimes difficult to move beyond those composers in exploring repertoire. My aim in programming this recital was to give students some ideas of composers they may not have studied yet, but whose music they may be interested in learning for their own recitals.

“I compiled a giant list of composers, both historic and modern, whom I felt were in some way under-represented in the standard recital repertoire. I then narrowed the list by music that I could find and could sing, and then finally by music I really loved. It’s an incredibly varied program, but every piece is stunning in its own way,” she explained. “I hope that each person in the audience will find something that piques their interest, that winds its way into their heart, and that draws them into further exploration of its composer. It is my joy and honor to make the introduction.”

An international performer, Wyma has been praised for her strong, solid performances and soaring, powerful voice. The Kansas City Metropolis praised her performance of Norina in Don Pasqulae, writing, “Soprano Julie Wyma sparkled with a self-confident air and a strong, beautiful voice.”

Her oratorio repertoire includes the soprano solos in Bach’s Mass in B Minor, Matthäeus-Passion, and Magnificat, Handel’s Messiah and Judas Maccabaeus, Haydn’s Heiligmesse, Mozart's Requiem, Mass in C, and Krönungsmesse, Fauré’s Requiem, and Monteverdi’s Vespro della Beata Vergine. She has presented recitals in Berlin, Germany; Antwerp, Belgium; and throughout the United States.

Wyma’s operatic highlights include Pamina and The Queen of the Night in Die Zauberflöte, Gilda in Rigoletto, Marie in Die verkaufte Braut, Musetta in La Bohème, Belinda in Dido and Aeneas, Clorinda in La Cenerentola, Sophie in Werther, Amy in Little Women, Despina in Così fan tutte, Lauretta in Gianni Schicchi, Monica in The Medium, Beauty in Beauty and the Beast, Frasquita in Carmen, and Lisette in La Rondine. 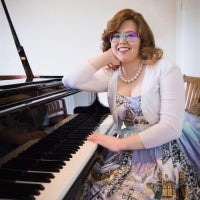 “I am very excited to be performing with Ms. Wyma,” said Josie Merlino, DMA. A highly requested musician for concerts and recitals, Melino added, “I love performing at the University of Pittsburgh at Greensburg. [The Mary Lou Campana Chapel and Lecture Center] is a lovely venue in our area.”

An accompanist for the opera workshop at Seton Hill University and numerous student recitals at both Seton Hill and Saint Vincent, Merlino also is the director of liturgical music at Mary Mother of the Church in Charleroi, PA. She enjoys teaching students of all ages at the Community Music Program at Seton Hill, as well as her private studio at Saint Vincent in Latrobe, her church in Charleroi, and her home in Mount Pleasant.