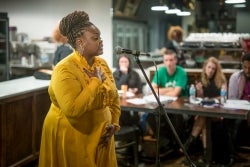 The Pitt-Greensburg Diversity Student Coalition welcomes Ashlee Haze, poet and spoken-word artist as the keynote speaker at the campus’ annual Soul Food Dinner. At the event on Thursday, February 27, Haze will speak on the theme of how to be successful as an African American. The dinner begins at 8 p.m. in the Wagner Dining Hall (Chambers Hall, University of Pittsburgh at Greensburg, 150 Finoli Drive, Greensburg, PA 15601).

Haze is recognized as one of the most accomplished poets in the sport of poetry slam where she has earned the nickname “Big 30” because of her consistency in getting perfect scores. A three-time Queen of the South Poetry Slam Champion, Haze has been part of the Atlanta Poetry circuit for more than a decade and has been writing for more than 15 years. She also has been a two-time National Poetry Slam semi-finalist and appeared on NPR’s Tiny Desk series alongside Blood Orange. After her poem “For Colored Girls who Don’t Need Katy Perry when Missy Elliott is Enough” went viral, Missy Elliott was so moved she showed up at the poet’s house. Haze is the host of Haze’s Higher Learning, an educational podcast for creatives. Her sophomore book "Smoke" is scheduled for release fall 2020.

The annual Soul Food Dinner is an opportunity for the campus community to gather and celebrate the African-American culture through food and the message of a guest speaker of note. The Diversity Student Coalition is dedicated to engaging and involving students of different races and ethnicities in the campus and community issues. The organization is also dedicated to stimulating knowledge and interest in campus issues to promote debate, discussion, and ideas.